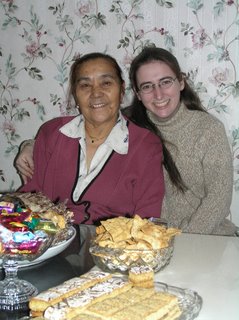 This lesson was drilled into my head as a child. And yet now that I live in Central Asia I not only talk to strangers, but after only knowing them for two minuets I give them my phone number, tell them where I live and invite them over any time (okay mom if you are reading this you can feel better I have never once given my name and number to a scary looking guy, only young college girls and nice old women). After a while however I forget half the people I have given my number to.

A woman called me earlier in the week and told me she was Arzigul ( a name around here that is almost as common as Jennifer). Then she told me she was a teacher at some school (she said the name really fast and my Uyghur listening level on the phone is still pretty low) and that we had met one day on the road in front of my school. Since I didn’t catch the name of the school, that narrowed it down to about three Arziguls that I knew who are teachers. So I just guessed which one (based on who I had seen most recently and who tended to call me the most) and gladly agreed to go over to her house for lunch on Sunday.

Sunday at 11:30 I hear a knock on my door and assume it is time to go. When I swung the door open there were two teenage boys standing, asking if I was ready to go. Since I didn’t know what else to do I followed them out of my building and towards the teacher housing at the back of the campus. When we arrived at a home I realised the woman was not the Arzigul I was expecting… in fact I had only met this woman one time about six months ago. It has taken her that long to get up the nerve to call me.

Even though I knew nothing about the family or the woman I was visiting we ended up having a great time. Her husband just started studying English and so had convinced his wife to call the foreign girl. When I got there he proudly declared “I have cats” and pointed to the two big fur balls on the floor. That was all the English he could remember from his first week of class. So the rest of the after noon was Uyghur language class for me as a family of four all tried to talk to me at the same time. They have invited be back for lunch every Sunday.

Out here the best things come from talking to strangers. I am very thankful.
Posted by KSA at 9:44 am