A Night in Square

Every city around in county has its own Peoples Square. In reality it is nothing more than a cemented over area in the middle of town that features a monument or a statue commemorating something famous. But in practice it is one of the most happening places. Ours features a ten foot squared television screen where they will often show sporting matches, rides for kid, dancing for adults. It is the heart beat of the city. Despite all of its amazements and distraction, I rarely make the trip on the bus anymore because it seems whenever I go I draw way to much attention.

If you saw the video I sent home a few years ago, you may remember the scene with the expatriate youth doing a crazy Olympic night, we held that at the Peoples Square. That night we gathered a crowd of over a hundred people just standing and staring at us.

The other night one of my friends asked me to join her at the square. I was once again overwhelmed by the number of activities that go on there and the number of people just hanging out. After wandering around for a while, my friend and I joined a group of people who were painting ceramics. It beats me as to what is so fascinating about two western girls doing crafts… but at least thirty people stopped to watch us. Even one of the guys who worked there taking pictures for the tourist stopped by with his camera. I told him we didn’t want our picture taken. But he insisted. He didn’t want to sell us the picture of ourselves; in fact he wanted to use it at his booth for advertisement. So now I am forever promoting the fun that comes with a night in the Square. 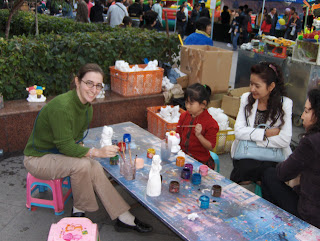 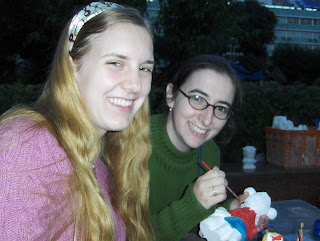 Oh my goodness! I am sitting here reading your blog because I'm having a giggle fit and there are people in my living room having a really serious conversation. Your blog isn't helping my giggle fit at all because I keep finding hilarious memories, or at least they all seem hilarious right now, like our traditional medicine adventure:) Oh, but it warms my heart to see these pictures! Who knew how this night was just the beginning of date nights... :) You make me happy.