T’is the Season to be Jolly

This semester as I have been getting to know some of the older ladies on campus I was surprised to hear three or four of them tell me about the same Christmas party they had attended many years ago. I guess there had been some other foreign students who had thrown them a party. They had played silly games like the “I’ve never” game, or little Christmas presents in the middle. They had eaten Christmas cookies and listened to Christmas music. It sounded like fun, but nothing really special. The thing that amazed me though was that all four of these ladies still remembered the night in such detail almost nine years later. Some of them even claimed they had never had that much fun in their life.

After hearing all their stories I decided to throw a party of my own. The goal was not to out do the one from years before, but to add another good memory to the season. It was a small party, only three ladies. We eat cookies I had decorated, listened to music and played the game where you wrap a small gift in each layer of paper and then pass it like a hot potato, when the music stops the person holding the gift removes a layer and gets to keep that gift. You would have thought I had invented the light bulb with how much they gushed about what a great idea that was for a game, and how much fun they had. Before they left I gave them all scarves that I had hand knit for them. 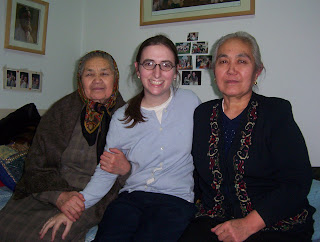 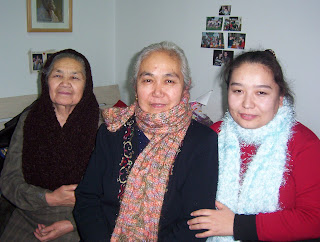 I hope some of the real light of Christmas shone through the simple party we had.
Posted by KSA at 9:42 am