Saying "I Do" is Cool

Last weekend I was invited to one of my friend's weddings. This in and of itself is not an unusual thing, but I was rather surprised by the time on the invitation. Normally local weddings start in the morning, and there are events at both the bride's and the groom's mosques, and a whole day long celebration. This friend however invited me to come to a hotel at 5 p.m.

Once I got there, I found out that earlier in the day they had done the traditional ceremonial wedding stuff, and that I had been invited to the party for their friends and co workers. Now you have to understand that the girl who was getting married is very trendy... she has learned English and thinks anything western is cool. It was obvious by her sleeveless, strapless, white wedding dress that she showed up in. Something tells me that was not what she was wearing to the mosque earlier in the day. 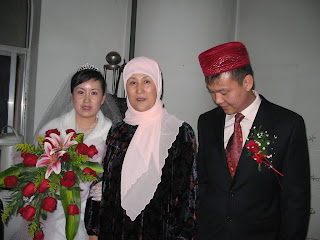 She and her husband followed two little kids (the ring bearer and flower girl) as they walked into the room to our ever so traditional tune 'here comes the bride'. Their friend who was acting as the receptions MC then asked them... in a some what mocking voice if they promised to "love, honor, and cherish each other in sickness and in health as long as they both shall live" they both said "I Do". Following which the ring bearer presented them with rings to exchange. The next thing I knew the MC was doing karaoke and cracking jokes.

It was a weird night to see such a scared ceremony being taken as a cool, trendy, cultural symbol.
Posted by KSA at 9:34 am