My Uyghur mom and her family recently took in a distant relative to help them raise their grandchildren. They have two small boys that it is mainly their responsibility to raise. Their son is living in Europe and their daughter-in-law who, lives with them, is a police officer and is so busy with work that she is hardly ever home. That means that my mom, who is almost 65 spends her days running after a five year old who is tough and has never heard the word "no".
I kept telling them it was too much for them to handle on their own. In the end their daughter-in-law asked a second cousin living in the country to move in with them and help with the children. She is a 12 year old girl, who like I mentioned before is not registered. Twelve is a weird age for girls some of them look like they are going on 30, and others, like this young girl, look like they're still 8. She has learned how to read and write along the way, but doesn't really speak any of the national language. She can barely lift the baby but she is very dedicated to helping with the laundry, dishes, cooking, and such.

My Uyghur parents have offered that if she is willing to stay and help around the house they will pay for her to go to a training school after their grandchildren have started school. It sounds like such a sad life for a young girl, but living with my Uyghur mom and dad and having an opportunity to learn a trade is a lot more than she could have hoped for otherwise. Her mom is getting remarried and her soon-to-be-step-father wants nothing to do with her. Sad stories like these are a daily part of my life. 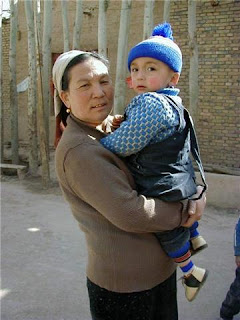 If an unregistered child can't go to school how will she be able to go to training school once the grandchildren are in school even if your parents pay for it.

I was wondering about that too.

That's so sad. Every child should feel loved, wanted and needed. I hope she finds a new life here in the city.