Directions in a Small Town

I just got back from a trip to a small village about three hours from my home. I went with one of my Uyghur friends. Neither of us had ever been to this place before, so we weren’t really sure where we were heading. We found a vehicle heading that direction and got in, the driver himself was not totally sure, but we got in the car trusting that we were heading in the general direction. A few km up the road, another passenger hailed the car and jumped in with us. The driver asked this woman if she knew where to find the place we wanted. She started giving him directions that would only work in the country side.

“You know where Hajji Akmet lives? Two lanes over from him is Hajji Gulsidem. You know her house has the blue door. Right at the end of her property is the creek and that is close to where they are going.”

It was such a simple interaction, but it spoke volumes to the cultural value of the people. Akmet and Gulsidem are known throughout the community for their piousness. Both of them have gone to Mecca as a response to one of the five pillars of Islam. This makes them well known in the community. Even their homes have become geographical landmarks, right up there with the creek (considering the village was on the edge of a large desert I would have thought the mention of water was all the direction you needed). I couldn't help but notice how she assumed that the driver would know Akmet ( a man)’s house without any detail, but felt compelled to describe the equally religious Gulsidem ( a women) by the colour of her front door. 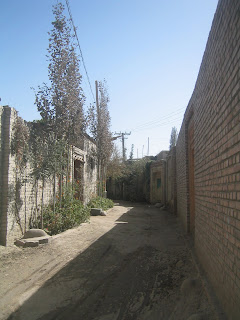 I tried to catch my friend’s eye to see if she found these directions as interesting as I did, but being Uyghur from a small town herself she didn’t even blink. As we walked around the village over the next two days I realized how hard it was to tell one lane apart from another. I began to realize that blue doors, and religious people were not just important to the spiritual life of the community, they really were the only way to find your way around. 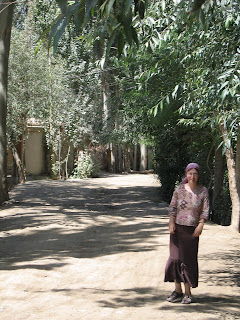