This past week I went to the eastern part of our province ( new territory for me- I normally travel south).  One day our hosts drove us to their home town in the mountains.  After two hours of driving through stony peaks with little to no vegetation, the road opened into a beautiful lush green valley.  The town itself was small, but famous for the graves of the Uyghur Romeo and Juliet – better known around here as Merdan and Jin Moden .

This couple is said to have lived in the 1700 hundreds and they were in love.  He was a poor farmer boy and she was a beautiful young women.  The King of the area took notice of her beauty and sought her hand in marriage.  Now like any good legend, this is the place where facts get a little mixed up based on who the story teller is.  One person told me they ran away together, and when the king found them he had them put to death or maybe they committed suicide before the king could find them.  Another friend explained that the king had the young farm boy killed and took the young girl as his wife.  She was so miserable in her marriage and wanted to be with her true love so much that she threw herself off the tallest mountain.


I don’t know which one is true… but I guess every culture has their tragic love stories ( I know Uyhgurs has more then just this one) that endure through the generations as an example. 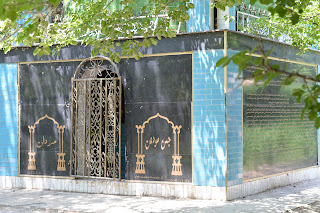 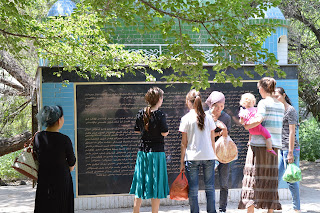