Autograph and a Picture... Sort of


My friend  recently posted the following on his blog and I thought it was best to capture the evening in his words.


The seats were low, hard, and uncomfortable.  I had long lost feeling in my buttocks.   My knees were squished into what was supposed to be leg-room.  The lights were low and the speakers were pumping out music at a level several hundred decibels too loud.  When the soprano singer in an elegant up-do and floor-length gown hit her climatic high-note, I literally plugged my ears.  She was talented; there just seemed little reason to put the volume up that high.  "Listening to music at this level is bad for your health", I thought to myself.  Before us now was a group of dancers in gaudy costumes with exaggerated smiles plastered on their faces.   Admittedly they were very good.  However, it seems little to separate one minority dance performance from another.   Though I did enjoy some of the numbers my mind was going through a list of things I could have done rather than come to this performance.

Reappearing on stage the emcee began his introduction of the next performance.   Looking at my watch I wondered just how many more performances there were before I could get out of this seat and let the feeling return to derrière.   "Next is one of our own.   Please welcome Arken!"  Arken?  Did he say Arken?  I looked at the lady next to me.   She had an equally surprised expression.   "Woah.   Arken is here?", I inquired.   "Apparently so", came the reply.   In the next instant, there he was on stage.   Now.   Most of you reading this are asking, "Who is Arken?"

When I first came to here  in 2004, Arken was one of the first artists my friends introduced me to.   He's a Uyghur singer that sings a stylistic blend of pop with flamenco guitar and a more traditional Uyghur style.   He's famous for such tunes as Where is my girl?,  Balangzi, and a cover of Why is the rose so red?.   If honest I'd have to say I haven't enjoyed what has come out in his later albums, but much of his earlier music is still well known.    Needless to say, it was exciting to see Arken live.  Joining the rest of the crowd, I belted out "Heeeey giiiiiiiir.   I love you to death!"   It was a little disappointing that he was singing to a canned backup track and not live music.   But taking it for what it was worth, I thoroughly enjoyed his 3 songs.   I would have been happy if he'd kept going, but alas, others were waiting to blow out my eardrums with their soprano wailings.

"Thank you for coming!", the emcee shouted, marking the end of the show.  Extracting myself from the contraption they called a seat, I chatted with my friend.  "Let's get a picture with Arken", one of them blurted out.   "Why not?", I said.   Heading backstage we found Arken surrounded by a group of university students.   They were fairly orderly as they pressed in to get pictures and autographs.   Intimidated by the crowd we stood off the to the side waiting for these young enthusiasts to have their fill.   Looking over, Arken noticed us and smiled.  It seemed he was making his way over to greet us.   Then.   Things got ugly.

"He's over here!" came a high-pitched shriek of an unidentified teenage girl.   Suddenly the room erupted in giggles, gasps, and shrill exclamations of Arken's name. "Arken!  Arken!  Oh God!  ARKEN!!!!!!!"   Through the door and down the stairs came a seemingly unending stream of star-struck, adolescent female,  Arken-mania.   I remember growing up, seeing videos of Elvis concerts and girls literally fainting at the sight of him.  This was by far the closest I have ever seen to that kind of behavior.  The room had been active before but it suddenly erupted into mass chaos; pushing, shoving, grabbing, and shrieking.   I enjoy Arken's music but I was definitely not THAT committed to my picture and autograph.  Seeing our annoyance, Arken intentionally pushed past of few of his withering fans and made his way over to us.

We shook hands and exchanged greetings.   Next came the fatal mistake.   My friend handed the camera to one of the shriekers.  She was literally shaking with star-struck hysteria as she snapped a picture of the 5 of us.   Turning to Arken, I thrust my homework notebook into his hand.   I had casually opened to a page with a few common get-to-know-you phrases with a large blank space on the bottom.   This is where it got awkward.  Looking down to sign Arken paused as his eyes grew wide?  "Huh?", he puzzled as he looked up at me and then at the notebook again.  Glancing down I realized his confusion.   The first sentence written across the top of the page was "Are you married?"   Well crap.   "No, no no.  Don't pay attention to that", I blurted out as I covered up my sloppy scribbles.   "Just sign here!"  By this time the teenage angst had reached deadly levels as they squealed out Arken's name and pushed their pen/paper at him.    My friend who speaks more Uyghur assured Arken that he was just signing my homework notebook and that I wasn't actually interested in his marital status.  In the struggle for autographs one especially brazen girl tried to grab my pen.  She managed to get away with the cap.  "Ha! What are you gonna do with THAT?!"  I thought to myself.   Realizing death was imminent if we didn't escape, we began pushing our way through the coterie of girlish madness.   I was both annoyed at these obnoxious females and laughing about the awkward moment.

Setting my sites on the door, I elbowed and shoved my way through the throng of teenagers.   These girls were obnoxious but at least I had a picture with Arken and could show off my autograph.  From behind I heard one of my companions shout over the crowd.  "Oh no! Jesse!!!"   Turning around I saw my wide-eyed school mate holding up her camera.  "You're not in the picture!"   "WHAT?!"   I stood there for a second, shook my head, and motioned toward the door.  It wasn't worth the hassle.   Having finally made my way out of the madness I turned and waited for my friends.   Reaching for the camera I glanced at the screen.  Sure enough, there was Arken, the three girls, my shoulder and my ear.  Unbelievable.  "Stupid teenage girl", I thought as I headed for the door.   The older lady that took us to the concert asked how it went.   When we explained both the notebook debacle and the picture fiasco she literally had to stop, doubled over in laughter, right there on the sidewalk.   I couldn't help but laugh with her. 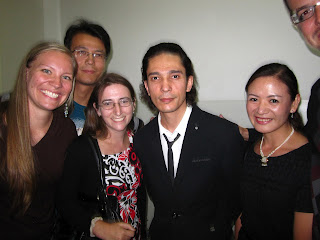