“Where you from?” the bus driver asked.  It was almost midnight and our bus was stopped at some obscure spot along the desert highway.

I gave a curt reply as I continued to exercise the pent up kinks and knots out of my weary arms and legs.

“Canada, huh…Do you have buses like this with beds on them?” He asked as he almost lovingly patted the beast of a vehicle in his care.

At this point you could almost see the wheels in his head spinning and turning and contriving a plan.
“Are there roads longer than 500km in Canada?”

“Of course, land wise it is the second largest country in the world”  The second I said it I regretted my hasty words.  I could tell they had only fueled his wild dreams.  He was in full on scheming mode, making plans faster than the old plodding bus he drove could every dream of travelling.

“Someday, if Allah wills, I will open my own sleeper bus company in Canada and be rich”  This village man declared with resolve.

I translated from my travel companions as we climbed on the bus. “Ugh” we all struggled to keep a straight face and not scrunch up our noses in distant at the strong stench that greeted us upon embarking.  The smell came from to many people, stuffed in too small of a space, for way too many hours. “There is a few things he should improve before introducing this transportation to the west, like ventelation”.  The group had been joking for the last few hours that the only thing worse than B.O is ten people’s B.O. and the only thing worse than ten peoples B.O. was the twenty smelling feet that came with them. 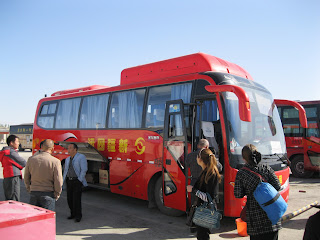 We ran into our next forward thinker a few days later at the museum.  The older security guard guy who was responsible for unlocking the doors and turning on and off the lights quickly learned I could speak his language.  He followed me around from one display to another peppering me with questions and distracting me form admiring the old coins, cloth and tools.  His line of questioning felt very familiar.  “Where are you from?” Is that a rich country? Is it easy to get there? Are there lots of jobs” He started pointing to traditional Uyghur elements around the museum.  “Do you have this or that in Canada?”

He was literally taken aback when he learned that we didn’t have nan in Canada.  It seemed impossible for him to believe that a society could survive much less advance without a nan stand on every second street corner selling hot fresh bread.  That’s when he made his declaration “If Allah wills, I will open a nan stand in Canada and become rich!” 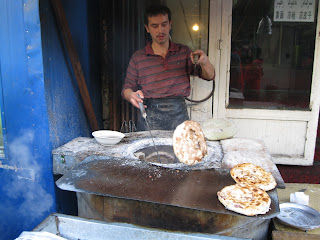 Later that day we stopped outside the bazaar for a refreshing cup of freshly squeezed pomegranate juice.  The man operating the booth stood proudly beside his juicer.  Drops of the bright red liquid liberally sprinkled all over his face and clothes, the whole effect made him look like he had been in a fight with blood stains on his clothes.  We all picked up our sticky glasses to toast our great day, when the mad started the familiar line of questioning.  He seemed pleased to learn that his particular line of work was unique in the west.  Before he could declare his intention of moving and getting rich I slammed the empty cup on the table and motioned for my guest to keep moving.  Turning around slightly I watched hi straighten up our used cups on the table and pour fresh juice into them, never even pausing to wash or rinse them between uses.  “No wonder they were so sticky” I thought to myself trying hard not to guess how many people had likely drank out of it before me.  Instead I laughed to myself  “If Allah wills he should move to Canada and learn how to wash dishes.” 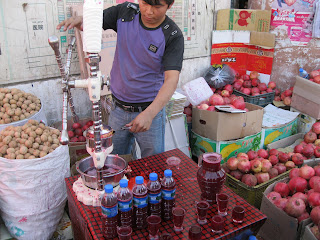 You can drink that without getting sick?!