Letting It Go to My Head

Anytime I step into a room, or get on the bus I feel like a movie star since every head turns and all eyes are focused on me. Since white western foreigners are still some what rare in this part of the world, I tend to draw a lot of attention.

I mentioned in my last post a group of women my classmate and I met when we were Hati lopping. When I entered the room these women all stared at me. One of them touched my hair, amazed with how "yellow" it was. Two of them sat across from me commenting to each other. "look at her nose, it's so big" and "look at her skin she is so white and pale". I don't think they realized at the time that I could understand every word.

When I first started understanding local languages, it was a real struggle to over hear people talk like this about me. It took me a while to realise they meant it as a compliment. In the west we don't see being repeatedly called a big nosed pale white person as a compliment, instead it is a sign to get a nose job and go to the tanning parlour. I was really self conscious about my appearance and how often and openly the people around me were discussing my flaws. But the truth is everyone here has slightly darker skin, and they believe the whiter you are the more beautiful you are. So every cream in the store has a whiting ingredient in it. They also think people with tall noses are beautiful and lucky (if you have looked closely at my nose in profile you would know just how lucky I am).

These same woman who asked my friend if she had had plastic surgery, sat across from me for over an hour saying I was so beautiful, that they wanted a nose like mine. They asked if I rubbed milk on my skin each night to keep it this white. By the end of our visit my classmate way very afraid I would have gotten a big head from hearing for an hour straight how gorgeous I was. Thankfully in Uyghur when you tell someone they have a big head it is also a compliment meaning they are very diligent and organized. Who knew I was an organized beauty. 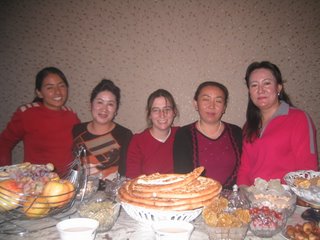 Have you had Plastic Surgery?

I mentioned in my Christmas post that a lot of what Uyghurs know, or think they know about western culture comes from what they see in movies. This point was further verified to my classmate and I recently when we went visiting over the holiday. Uyghurs do watch a lot of Hollywood movies, (likely because they are sold in the underground DVD market real cheap) but their favourite of all is Korean dramas. All of my teachers are addicted to Korean dramas, which have all been translated into Uyghur and are daily shown on television. Uyghur culture and Korean culture are very similar in how they respect elders and the lack of public displays of affection on TV. When we visit student's dorm rooms they have large pictures hanging above their beds of their favourite Korean actors, and our teachers are always talking about what happened on the latest episode.

My classmate is Korean American and so people are always asking her questions about Korea and the latest drama. When we were visiting over the holiday we went to a friend’s house. She had four or five other women over visiting, all of whom live in the country side. One of these women knew a lot about her favourite movie star and therefore she figured she knew a lot about Korea in general. She looked my friend up and down and said, “you are pretty, when did you have your plastic surgery done?” (it took us a while to understand since plastic surgery was not covered in our textbook). My classmate was rightfully a little shocked and taken back. The woman went on to explain that she had read some where the large percentage of Korean actors that have plastic surgery, and that even a lot of none actors are starting to also have surgery. Her own reasoning therefore said “they must be an ugly people group if everyone needs plastic surgery”. My classmate, however, was not ugly so she figured she must have had work done to get that way.

It just goes to prove that you can’t believe everything that you see on TV, and have to be very careful about drawing assumptions from a limited amount of knowledge. This is a good rule for me. In the last few weeks all of my local friends have been busy preparing for exams and studying so my new favourite pass time is watching Uyghur movies. It is great since now I can actually understand some dialogue and see some of the culture played out in front of me.
Posted by KSA at 10:10 pm 1 comment:

Our teacher called us last night at about 8:30pm and asked if we would be up to having our final exam this morning. Thankfully it was just our reading class exam and all of the answers were right there on the test page for us. I feel a 99% coming on baby.

Happy 2007. It is hard to believe that this is the third New Years I have celebrated out here. This year the general celebration of the New Year was very much over shadowed by Korban festival, but my friends and I still had a good time. I hope you did too. I also hope that this New Year will be a great one of growth for you, I know that is my hope for myself I want to grow not only in knowledge of local language and culture, but also in personal maturity.

The Colour of Forgiveness

It has been more than 40 days since I wrote about all my rules for eating food in a Uyghur home over a holiday. You can tell how many days since we have already come to the next major Uyghur Holiday. Just 40 days after Muslims celebrate the end of the fast they have the day of blood. This is the holiday that remembers the sacrifice that Abraham almost made of his son Ishmael. It is said that at the last moment God saw Abraham's faithfulness and sent a lamb down from heaven. Each year Muslims around the world sacrifice a lamb in memory of this event. But the lamb is meant to be more than just a memory. It is a means to receiving forgiveness. 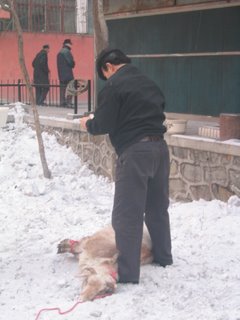 Reading the koran over the the Lamb

This year I got up early in the morning on the 31st and went down to one of the biggest mosques in town. If there is one call to prayer a Uyhgur would not dare to miss all year, this is the one. By 8 in the morning the street had to be closed down since there were so many men gathered around with their prayer rugs. We stood on the overpass near by and were amazed at the colourful patchwork their prayer rugs made all laid next to each other. Off to every side there were herders selling sheep to be sacrificed. So much for being with our blemish or spot, each sheep was marked by their owners so they would know which ones were theirs to sell. 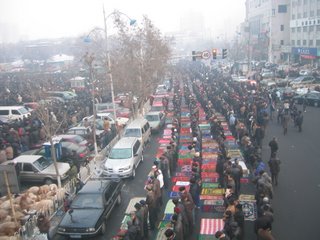 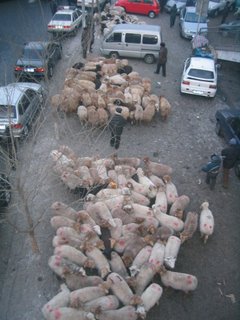 Later in the day I walked around the neighbourhood and witnessed the number of sheep hanging from the trees as their blood spilled to the ground. Soon the black snow was covered with blood, and sheep parts. Amazingly enough three days later the black snow was covered over by a fresh white clean layer of snow- now if that doesn’t ring with the colour of forgiveness, nothing does. As I walked about that afternoon I stopped to talk to the women who were outside. I asked many questions about the holiday and about sacrifices in general. I learnt a lot about there thinking and was even able to share some of my own. It was interesting having both the biggest western holiday and the biggest Muslim holiday in the same week. It has been a week to reflect on birth and death of giving and sacrifice.

We think we gain weight in the west over Christmas, I have no hope. This week will be filled with going to visit local friends in their homes. At each home the freshly slain lamb meat will have been boiled and be sitting on the table to eat. It is impossible to leave a home without eating a lot of meat (or in most cases a lot of lamb fat). Oh well, I guess I will just have to revisit my own eating rules I wrote about in October.
Posted by KSA at 11:18 am 1 comment: