Thank you all for your concern over the last week. I just wanted to let you all know that I am out of the hospital and safely recovering at home.

Since my wonderful Canadian health care (the one I have boasted about many times to you Americans) lapsed since I have spent too much time overseas.... Since I wasn't sure what sort of coverage my international company had in Canada I was scared to go for medical help when I first started to feel sick. I spent two days lying around home moaning in pain, before my parents suggested we call one of the doctors that attends the same church as my brother and at least tell him my symptoms over the phone. He not only suggested meds, but decided to stop by the house on his way home (who knew Doctors still made house calls???)

After a quick examination the doctor was the one who actually called 911. The ambulance guys arrived at our house checked my vital signs and declared that all looked good. They even asked if I really wanted to go to the hospital. If it wasn't for the kind doctor still standing in the corner of my bedroom vigorously nodding his accent, I likely would have stayed put. As it was the ambulance guys said they couldn't get the stretcher up the five stairs in our house, so they asked if I would mind walking outside to their vehicle.

Their lack of concern placed me low on the triage list at the hospital waiting room. We arrived at 6:30ish and likely didn’t see anyone for 2 ½ to 3 hours. During that time I was sitting slumped over in the wheelchair they provided watching as limping people came out with casts and other maladies seemed to be being treated all around me.

Within a few minutes of calling my name the nurse had me on IV for my dehydration, still not sure how the whole thing was going to be funded I have to admit I started counting each vile of blood they took and each bag of medicine they hooked up to drip into me. Blood work showed that my white blood cell count was elevated indicating some sort of infection. More tests and several hours later they realized my appendix had ruptured. Suddenly the pace picked up and I was being presented with release forms to sign and prepped for surgery. It wasn’t until 5:30ish in the morning that we actually got the show on the road.

I spent a week in hospital hooked up to IV and feeling weak, but thankfully I am home now, with the guarantee from my international insurance company that they will pick up the whole bill (they have even called a few times just to check up and see how I am feeling). I am still really tired and wear out from a quick walk about the block, but thankfully I am okay. As one woman encouragingly said to my mom the other day “You know you can die from that”.

This is my first day trying to eat something other than soup and liquids. It looks like I may have to push my return date back a few weeks, from June 9th until the 20th or so. I still need to look into the price change, but mom assures me she is willing to pay the difference.

Where In the World is KSA???

Since I haven't blogged for over a week I thought you might be beginning to wonder where I was. So I asked my mom to post a short something for me to explain my absence.
So - Where In the World is KSA??? - she's in hospital recovering from an emergency appendectomy on a ruptured appendix and has been since Friday evening May 20th. She seems to be coming along and her spirits on the whole are good but any prayers and good wishes you wish to send her way would be appreciated.
Once she's home and doing better she'll be back.
Posted by KSA at 10:01 pm 4 comments:

The Joy of Friendship

Last weekend I had a wonderful time renewing old friendships… all of my college roommates got together and threw a reunion barbeque/ welcome home Karen party. I haven’t seen some of these girls since I graduated almost 10 years ago. It made for a fun, and slightly crazy afternoon as they all brought husbands and children with them. Thankfully one of my friends had the brilliant idea of making the kids wear personally designed hats with their names on them, so I could tell everyone apart. The hats didn’t last long in all the excitement… but long enough for me to learn who everyone was. Here are a few pictures from our great day. 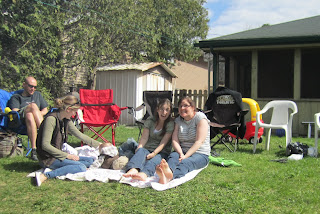 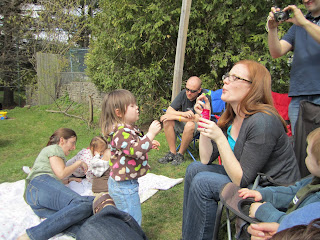 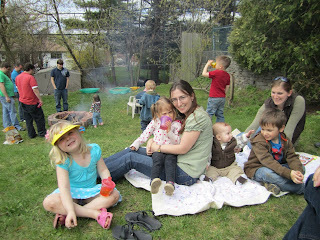 My mother has always called me a “kid magnet”. Even when I was a child myself, I was known for gathering the younger kids around me getting them to play together. At the mall I would smile at child and they would scamper away from their mother’s side feeling the pull to come and talk to me. This slightly stockerish trait is still alive as well as part of my personality.

Last Saturday I took the train up to visit friends. A little girl and her grandmother got on at the same stop as I did. Before I really even knew how my friendship has started with this little fellow traveler, she had brought her crayons and princess’ story book over and plopped down in the empty seat beside me. For the next two hours she chattered away telling me all about her little brother, her classmates in kindergarten and her purple backpack. By the end of the two hour ride my seatmate gave me a huge and proudly declared me to be her “new best friend”.

She and her grandmother disembarked at an earlier destination, moments after they were out of ear shot, one of the women sitting a few sits ahead, popped up and turned around to face me.

“You’re really good with children,” she said “you should have lots of them when you grow up.”

I knew she meant it as a compliment, but I didn’t think my behavior over the last few hours had been so juvenile as to discount any adult status granted to me for my 31 years of life. She was still looking at me, seemingly waiting for a response. I did know what to say, so I quietly mumbled a lame “thank you”.

One of my fellow expats living in Central Asia is known throughout our community for her over the top enthusiasm. Her expression of delight tends to manifests itself in an extra syllabification to punch up her sentence. Something is never just Amazing it is A-maz-i-ing, or Fan-ta-sti-ic . The more syllables she can stretch a word into the better it reflects her enjoyment. She uses hyperbolic super adjectives.

Last weekend I made a trip to Vancouver BC and down into Bellingham Washington. I have to admit the cool vibe and the gorgeous sights made me want to infuse a little more life into my speech just to capture the full wonder of it.

Look at these pictures they are GOR-GE-OUS 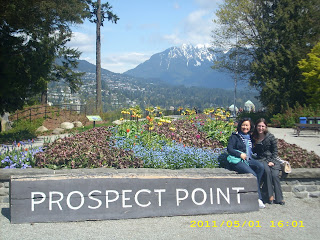 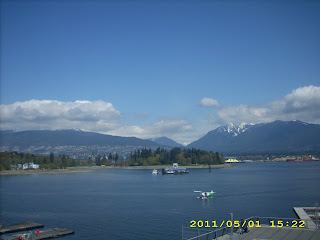 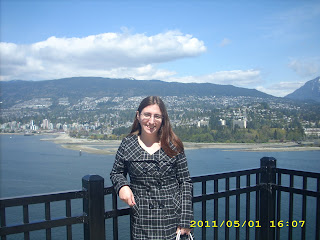 Turn Up the Heat

When I am traveling I hate the question “how did you sleep last night?”. I very rarely sleep well when I am in a strange location, but this weekend while I was staying up in a hotel in Washington state it was exceptionally bad, and totally unnecessary.

I guess Seattle area is known for its rain this time of year, and many people expressed that April had been colder than normal. All of this culminated in a rather chilling hotel room. It was one of those nights that I would lay in my bed, with toes like icicles, dreaming a beach on the equator, just hoping my dreams would be enough to keep me warm. I was scared to move or roll over in the middle of the night since I knew the sheets themselves were cold I and would have to spend half an hour warming up and new location.

This restless frozen state continued until 6 in the morning. Just as I was preparing to give up and go have a hot shower I noticed the radiator located under the window. Suddenly the reality that was us back in North America flooded back to me. I jumped up quickly, grapping the blanket off the bed to wrap around me as I went to check it out. Sure enough there were controls on the side and within seconds I could feel hot air being blown out with force into the room. Between the happy hum of the heater and the gradual increase in temperature and dozed off for an hour or so of actual sleep that night.

Where I live in central Asia the heat in a building is regulated by the government. The heaters are turned on and off at a set date in the year, no matter what the weather is outside. Some of you may have heard me share recently about the struggles of being willing to give up my rights in order to better acclimatize myself to life overseas, that includes the right to warm and toasty on a cold wet day.

Many people at the conference got a good laugh from my 'how I slept last night story', especially since many of them have lived in the same part of the world and knew what it was like to try to overcome years of thinking one way in order to fit in at home.

161) Personal controls on the heater

162) a much better, and warmer night’s sleep my second night in the hotel