December 28th is a fun day around our house as it is both mine and my roommate’s birthday. Last year on my 30th we spent the day enjoying things I love to do. This year was her big 30 and I wanted it to be just as special. 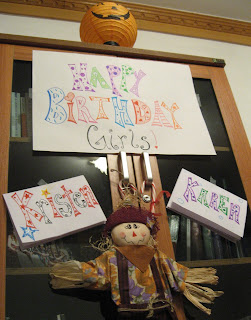 My roommate grew up in an odd home where her parents were mixed in their religious beliefs and therefore conflicted on the holidays they valued celebrating. This discord often caused tension in her house over any festive season. Halloween, however was different, neither of her parents saw anything wrong with their kids dressing up in funny outfits and getting free candy from the neighbors. October 31 quickly became her favorite holiday. This year we spent the end of Oct in the same fashion we have spent most of the month; running around getting our business started (or so worn out from trying that we had no energy to do anything else). Which means other than a few pumpkins in the living year we didn’t really even recognize the highlight of my roommates year.

To remedy that fact, last night we had our very own Halloween 30th Birthday party. Everyone was encouraged to come in costume. 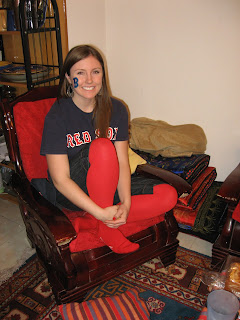 We had a sports fan, 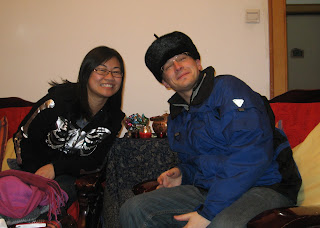 A Russian man and his flashy skeleton wife 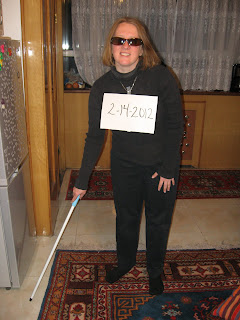 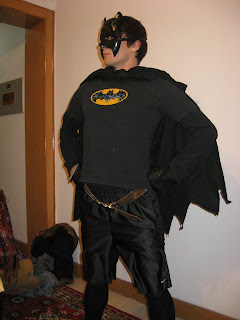 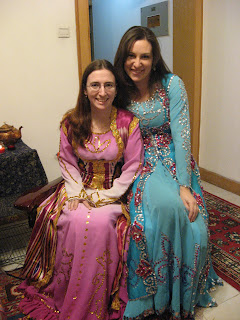 And we two birthday girls showed up as Uyghur dance princesses.

My roommate loved her new carpet, which we all went in together to buy for her. Sadly we are all out of floor space in this house; I guess we will just have to start hanging carpets from the walls (a very Uyghur thing to do). 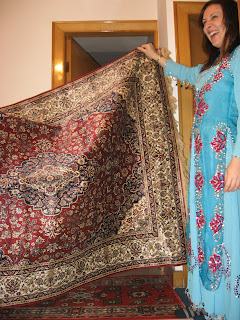 For my present I got my very own pomegranate press. I will sometimes buy pomegranate juice freshly squeezed on the streets, but often regret it later when I get really sick from a combination dirty pollution covered fruit being dripped into an unwashed cup and passed to me to drink. 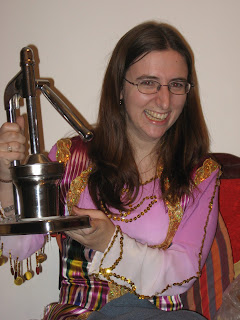 It was a great K and K 30th-31st Halloween/Birthday Extravaganza
Posted by KSA at 1:51 am 2 comments:

The Christmas Countdown is On

It may only be three days left till Christmas, but I have hardly noticed the coming of the holiday. I did a lot more get ready for Korban a month or so ago, back than I was totally into the local holiday, but right now Christmas trees and trimmings seem very far away.

This week the opening-a-business-headache worsens:

1) 1) You can’t register for taxes without a local bank account opened in your company’s name, and you can’t open a company bank account without having a registered tax number.

2) 2) I flew all the way to the capital a month ago to prove I was me and that my passport was valid. This week I have been trying desperately to prove that my local name is also me. The problem is on the translated version of my passport they use a transliterated version of my English name. This name just sounds stupid and nothing at all like a real name, so instead I go by a name that a friend of mine gave me six years ago. I spent a few hours of my week at a notary service trying to make my local nickname seem more official and legal.

CRAZINESS – We have been so wrapped up in office visits that we haven't even taken the time to put up a tree or decorate the house. Oh well Christmas is coming, if we are ready or not. Hope you all have a Merry Christmas !!!

I have become kind of known around town as a bit of a tour guide when friends have guests come in from the States. I like to take people on what has become known as “the Uyghur walk”. It is a trip through some of the back streets of town looking at Uyghur trinkets and playing guessing games on what you would use them for. We often stop and talk to vendors, and friends of mine. The walk covers everything from how to wash your hands respectfully in Uyghur culture ( three times, wringing your hands dry – no flicking the water off since that is very offensive) to how babies diapers work. The whole walk can be as short as twenty five minutes or as long as two hours based on the group I am taking around. 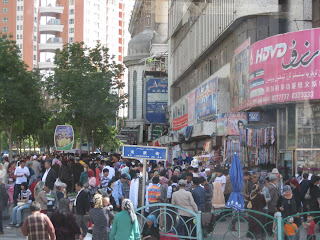 In the past some groups have politely listened to my explanation and nodded in the direction of the things I am highlighting. While others, like the group I took around this week, take the tour to a whole new level. They made videos of themselves all tasting the fermented Kazak cheese at the same time, so they could play them back later to see who re-acted the most to the bitter taste. They took pictures of themselves dancing with the statues in the square. They peeked their heads into the tunour to watch the nan baking. They asked me to interview the kabob guys who where BB-Qing their meat. They wanted to buy Uyghur music CD so they could practice dancing in their room later. They loved the butcher selling whole lambs, they checked out the boiled sheep heads, they even dared each other to sit and listen to the fortune teller. They were the best type of group, everything was new, everything was cool, everything has a story and they wanted to hear it. We walked for almost a full two hours and no one really seemed to notice the freezing December temperature. (Yes the pictures are file photos of the same walk on a much nicer day.) 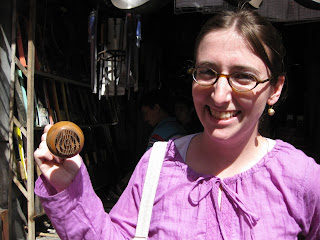 Me- playing host to the Uyghur trinkets guessing game challenge 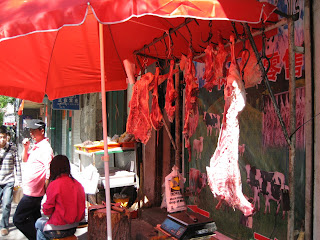 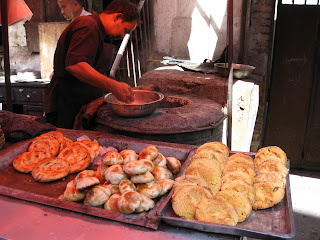 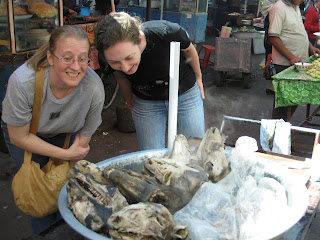 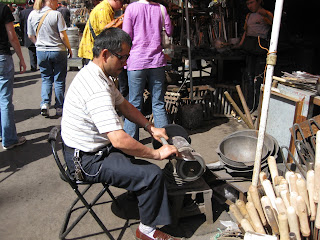 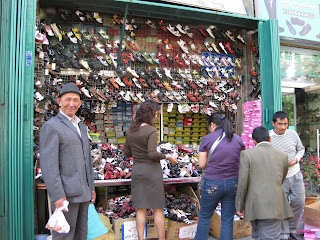 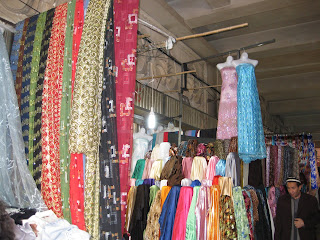 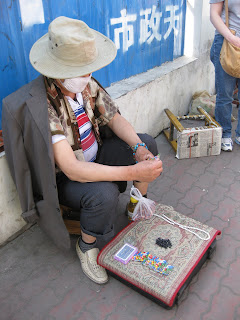 Seeing their excitement and explaining a little more in detail about this place reminds just how much I love it and how thankful I am for these unique aspects of my life.

Guess Who is Coming to Town?

Christmas is right around the corner and hints of it are starting to pop up all around town. I know our simple displays here are nothing compared to the Malls decked out with lights and glitter, bells and tinsel in theWest, but they do tend to have their own unique spin to the holiday. Whether it is the English corner kids telling me that Christmas is great because it is Santa’s birthday. 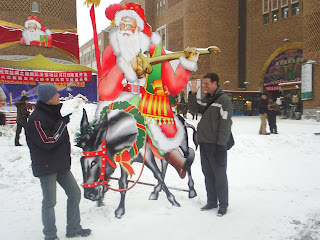 OrNasreddin Ependy Santa who travels around bringing Christmas cheer on his faithful donkey, 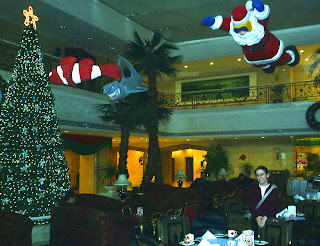 Even Finding Nemo underwater Santa, who swims around with his snorkeling mask on and wish all the fish a Merry Christmas.

This year a new Central Asian Christmas mistake was added to the unusual ways that this place understands one of our biggest holidays. I was at our local version of Wal-Mart, listening to them play Christmas Carols over the loud speaker when I started to pay attention to the lyrics. The song “Santa Clause is coming To Town started into its little known second verse with a triumphal declaration that:

Finally something to really get me into the Christmas mood.
Posted by KSA at 7:48 am 3 comments: 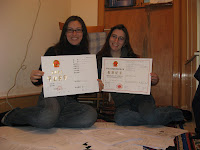 After mounds of paper work and three months of running to and fro from government offices, my business partner and I officially got our business license. We are now the proud owners of our company. Its English name is: Fusion translation and consultation station. We still have a lot to do between opening a bank account, importing the initial investment money, registering for tax purposes and getting work visas for ourselves. Despite all that is still out there ahead of us, this was a big deal and we wanted to celebrate. Spread in front of us is an extra copy of all the paperwork we had to create and turn in during this process. I am sorry to say a few trees died in the opening of our business. 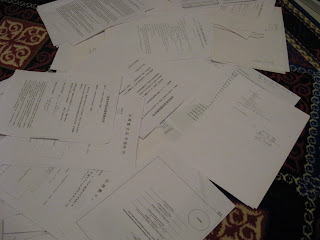 On Sunday evening I experience a first for me since living in this country; my friends and I went to see a movie in the theater, in ENGLISH. It was great! I could follow every plot twist, laugh at every joke, and squirm at the underlying tension. My three friends and I were the only native English speakers in attendance and it became obvious at several points throughout the movie. Some things, like almost being attached by a huge snake, are understandably scary no matter what language or culture you come from. The entire audience gasped or screamed in unison when such events took place. But the subtle underlying subtext of awkward teenage romance, can be expressed very differently. There were points when my friends and I would giggle nervously in hopes of breaking the stale mate on the screen, and the viewers behind could be heared whispering in Uyghur;

“What did they say?”

“I don’t think any of the characters said anything”

“Then why are all of those girls laughing?”

Other subtle turns of phrase or implied jokes would make us laugh out loud and leave our fellow movie goers shaking their heads saying “I don’t get it”.

I have mentioned before that I love watching Uyghur movies, but after seeing how much was missed by those around us, I realize I need to take it to the next step. Instead of just watching their films alone in my room at night, I should invite a group of Uyghur friends over to watch it with me. If they all start laughing or giggling at something I saw as an inconsequential event, to take the time to pause and really try to understand what is going on.

One other part of the movie going experience caught our attention. We are use to staying in our seats and watching the final credits role by, anticipating something the director might have added on at the end. Instead the movie hit its dramatic end, the screen went blank, the projector was turned off, the lights were flicked on and all the seats around us were emptied in under a minute flat. We were all still grabbing our purses and doing up our coats, when we looked around and realized we were the only ones left in the room.

It was defiantly a fun and relaxing evening, hopefully move English flicks will come to town soon.