I grew up all my life hearing stories of great explorers and heroes of old, who traveled to other countries and distant far off lands to study culture and learn language, much like I am doing now. Part of the adventure in these stories were the struggles and hardships faced by the travelers. Things did not come easy for them, and learning to live in a new country was filled with daily challenges. Many of the languages they had to learn had never been written down and the sounds were so foreign that a person would have no idea how to make them.

But this is a modern world we live in, and even the life of the foreign student has in many ways been made easier. Most recently, for me at least, was the purchase of Ernie (if you know me at all, then you know that I always name my computers and other electronic devises). Ernie (his Uyghur name is Irpan) is a electronic dictionary that translates from Uyghur to English and back again. He even has the national language and a Arabic dictionary and is small enough to fit in my pocket (although I would not keep him there for fear of tempting the pic-pockets beyond what they can endure). Ernie goes everywhere with me. The dictionary was designed and built by Uyghurs who are studying English, but it works just as well for us English speakers trying to learn Uyghur. 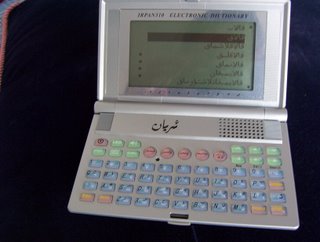 Since I bought him last week I have started to believe that the company should be giving me a cut of their profits. I have told all of the other Uyghur language students at our school and many of them have made the purchase or are planning to do so soon. And now I am even spreading the wonder of this little toy to all my friends and readers at home. I really am the best advertisement they have.
Posted by KSA at 11:09 am