After 30 hours on the go I have arrived safely with all my bags here and intact, which is quite amazing considering how tight of a connection I had in Vancouver. In local time I got into my dorm room at 10:30 p.m. I amazingly still had energy (I think I had hit a fourth or fifth wind), and I started to clean my apartment. It was all still packed up with boxes everywhere, since I had thought I was going to move. By 1 a.m. I had found the bed and a clear path to the washroom and decided to get some sleep. I had visions of sleeping in as long as it took me to get over the jet lag. But the construction workers in my building had other plans. By 6 a.m. the crashing, banging, and sawing had begun. No matter how many pillows I put over my head, the sound would not be dimmed. 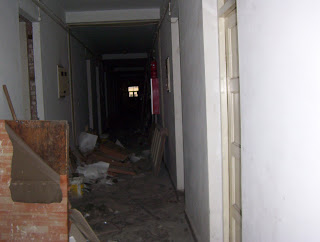 This was the look of my hallway when I returned. It took a little work to carry all my suitcases over the rubble.
Posted by KSA at 8:52 pm