Kids in the Kitchen the Next Generation

Several months ago I mentioned wanting to learn to cook Uyghur food. In fact at that time I even had my tutor spend a day of language lessons teaching me how to make the most famous Uyghur dish. While the food was good the lesson was a bit of a flop, since all I was allowed to do was stand there and watch.
But since being home I have stepped out on my own and attempted to rule the Uyghur food challenge. Three times now I have very sucessfully made 'big plate of chicken'. And last night I tried my hand at pollo. All in all the flavour was great, but the texture was a little off. That might have something to do with the fact that I did not follow the directions. I tried to prepare it in the crock pot instead of on the stove.
One important lesson I learned from all of this is: Don't tell your guests what is wrong with the food. The whole time I ate it with my family I sat there complaining about the rice being to gloppy and sticky. But when I took some over to my freinds house I refrained from making any comment on the texture. Since they had never eaten Uyghur food before, they assumed I had done it right and were filled with praises for my handiness in the kitchen. 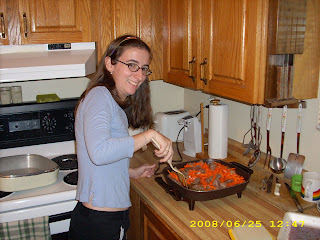 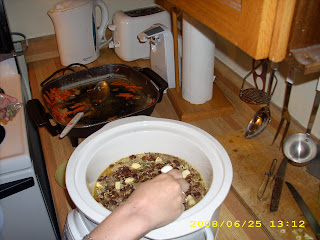 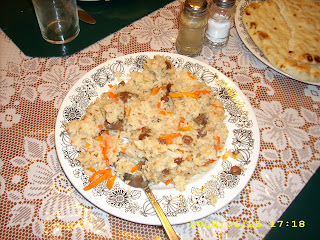