Kids in the Kitchen

When I was younger I took a class from our local community centre that was called “Kids in the Kitchen” We were suppose to learn some simple kitchen safety as well as how to cook some simple dishes. Instead all we did was stood in the kitchen and watched the instructor cook for us. Now don’t get me wrong I am never against eating food that someone has slaved over making for me… but the point of the class was our learning how to cook for ourselves. 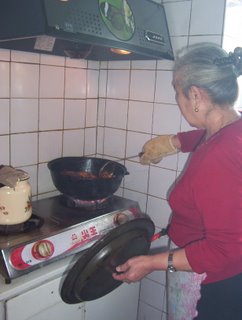 Any time I have tried to help an older Uyghur lady cook I feel just like I did in that class, like a dumb kid who can only stand there and watch. Before moving out here I was invited to a party in Ontario where all the Uyghur immigrants had gathered. That weekend I offered to help and started peeling carrots. Two minuets later the knife was snatched from my hand. A much older woman told me I had weak wrists and that I should go sit down. My only consultation that weekend was that five minuets later my mother was also shoed away for offering help (I don’t know what excuse they gave her)

Despite these scaring events I keep offering to help, hoping that one day I will do more than just stand in the kitchen, but actually get to chop, or fry or stir something. On Friday I talked my tutor into teaching me to make pollo for class. By the time I arrived she already had half the carrots chopped, she did let me cut two, but I think she was able to finish cutting the last eight in the time that it took me. For the rest of the morning I just watched as she fried up the meat, washed the rice, added the veggies and ever other step that goes into the process. I was allowed to carry the plates to the table, and even pour the tea before we ate. I know you have to crawl before you can walk, but my only question is how many years must I just be a kid standing in the kitchen. 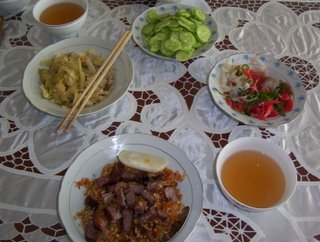 I might not know how to cook all of this... 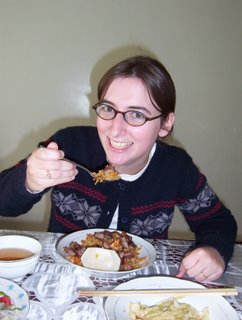 but I sure know how to eat it.

Hey girl what's with the fork. Didn't you notice the chopsticks that were in front of you. I like the sweater - is it new.
Mom

karen, i am so glad you filled me in on this treasure of a site! and i love all the pictures - as well as the cultural insights and comparisons, of course! :o)

let me tell you how i deal with having to be a 'kid in the kitchen': i take a second or two to feel guilty that i haven't done anything and then proceed to being grateful that i didn't have to deal with the pressure of doing anything...but maybe that stems from my gas stove/pancakes on fire home ec story from grade 8?! ;o)