One of our adventures on the trip was riding camels in the desert. We got up early in the morning, layered our skin with sunscreen in preparation for a long hot desert journey under the scorching sun. We then took a two hour bus ride to the middle of nowhere.
While on the bus we were the entertainment. Since we were travelling cheaply we took the local bus, which was filled with farmers and such, many of whom had never seen a white skinned person outside of the TV. They stared at us like we were aliens until some of the other girls started to feel uncomfortable under their intense gaze. I always figure in these situation it is best to confront it head on, and try to answer their questions, instead of being stared at the whole trip. So I struck up a conversation in Uyghur. If foreigners were fascinating, an 'American' girl who could speak their language was even more unbelievable. For the rest of the trip I was fielding questions from all over the bus. I think, by the end everyone knew where I was from, where I currently live, what I am studying, what I hope to do in the future, how much rent I pay, how much tuition I pay, how old I am, how many people are in my family, what job everyone in my family has and how much they enjoy their jobs, where we were going, why we were going, how long we would be gone for, how much we paid for our tickets, how many times I had been in that part of the province, how many years I had studied that language, and likely a dozen other things. I was like a circus freak, that just kept answering questions. Unfortunately having all this information did not stop the man from starring at us in disbelief, if anything it just intensified their gaze.
Once we got off the bus we headed out to the desert for a camel ride. But as we approached the camel owners it started to rain. They wanted to charge what I thought was an exorbitantly high price for an hour long ride... so I tried to talk them down. I complained about the rain, commented on 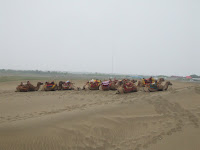 how few people would actually go riding on a wet day like today. I tried and tried but they would not budge. I turned to my friends to find out what they wanted to do... only to find one other girl still standing with me. Now you have to understand, when it comes to hard core bargaining there is always strength in numbers. The more people you have, the more business they would lose if they don't agree to your price. The more people you have, the more intimidating you appear. And yet despite that well known fact we were just two small girls trying to negotiate with all the camel owners. We regrouped, grabbed our friends and started again. It didn't matter that our friends couldn't speak the language, and couldn't understand what was being said we had more people. This time I took another approach, I played the "we are poor students" card. It is universally true that college students everywhere are known to be broke. I even went so far as to tell them how much the school charges foreign students to study and that we had to take the local bus to get here. When they still didn't move, We walked. This can be a risky move, because you actually have to be willing to leave and not get called back. But we called their bluff and headed for the bus. In the end our small bus driver friend told them to just give it to us. So we each got a third of the price knocked off. 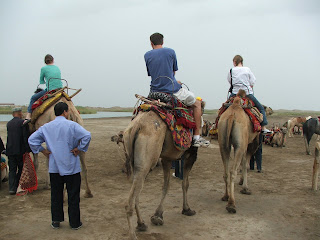 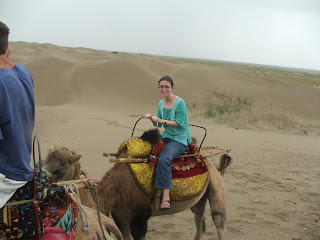 Which was good considering how cold and wet it can be in the desert. It was pouring and we all got drenched as we rode our camels with no names (I asked) though the chill damp desert sand. What a day. 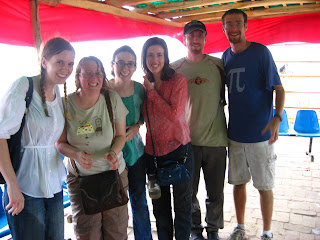