On our trip we took a bus up to a small city in the mountains. We were at about 15 000 feet with mountains stretching another 10 000 feet above us. The view was breath taking. I was also a little cold. It had rained all day on our way up, when we came down the mountain we saw many places that were covered in snow. We stopped to enjoy the view and take a few pictures. As I was talking to an older Tajik farmer, who was out with his 200 grazing sheep, one of my friends threw the first fist full of snow. This meant war. Both the Tajik farmer and our driver thought we had gone a little crazy, but really how often do you get to have a snow ball fight 14km from the Tajikistan border with a Tajik farmer, a Uyghur driver, five Americans and one Canadian in the middle of July at the base of one of the world's tallest mountains. Let's just say it was a first for me. What started out as a fair fight quickly digressed to all against one guy. 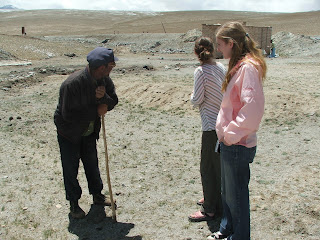 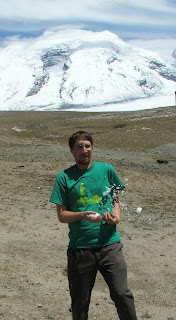 I commented to our farmer friend how fortunate he was to live in the mountains and be able to go walking with his sheep everyday amongst such magnificent peeks. He responded by saying "All of you foreigners think it is so pretty here, but really I think your home town is lovely" Lovely really? A clear sight of downtown Detroit has nothing on these snow caped heights. 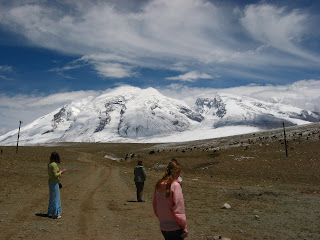 That Is great, man I would have like to see that in person. You know I am not a blooger but I can learn. I hope to here more from you...