I Don’t Know How Santa Does It

Christmas is drawing near and this year a few of my close friends and I decided not to buy each other gifts… but instead to pool that money and make gift baskets. We were each allowed to choose two or three local friends or families whom we wanted to give a basket to. We spent Saturday afternoon baking, buying fruit and finishing up cross stitch decorations. Each parcel contained banana bread, cookies, crocheted snowflakes, cross stitched winter senses, oranges, pomegranates, and some hot chocolate. We had even practised singing a song in the national language (which could be understood by Uyghurs and everyone else) to greet people with when they came to their door.

We started the night by taking buses from one stop to another, but soon broke down and paid the little extra to go by taxi. We had a lot of stops to make, and our arms were loaded with yet undelivered baskets. We almost had to be rude at each home as we wanted to just sing them a song (which is a lot harder to do after climbing six flights of stairs), pass off the gift, take a picture (which you will notice are mainly from the waist up… as everyone was answering the door in their long underwear) and leave for the next delivery, this was hard with Uyghur friends continually inviting us in for tea (a two hour event). 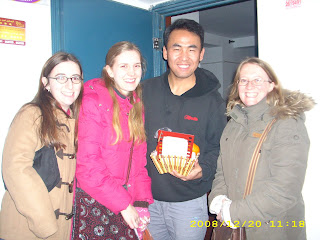 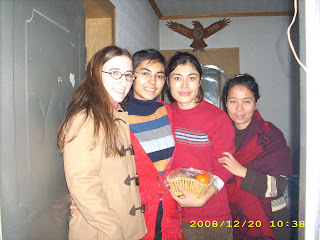 It was a cold crazy night, the temperature seemed to be dropping between each stop. It dropped so low that the batteries in both our phones and cameras were dying and making it hard to contact those at our next location. But we did it. We made 11 stops in just over three hours, with only one family not home to get their gift. We were all wiped out and very glad to crash at the end of it all. One night around the city was more than enough for me, I don’t know how Santa does the whole world in a night.

Seriously, what a wonderful thing to do this Christmas!!!! You rock!

But, you need the reindeer....that's Santas secret weapon :)

I love the pictures! We looked pretty good, especially for our last stop! Ho ho ho!