What is the North American custom for meeting new people? I know it is sad that I have to honestly ask that question but I don’t remember. The other day this Uyghur guy I had known for the last five years or so introduced me to his new wife. I had never met this young lady before, but I automatically greeted her with a kiss on both cheeks. As we talked for the next few minutes, I realized I was holding her hand and she was genteelly rubbing my back.

At the same time there was another couple with us, who had just arrived from the States a few days before. They were unable to understand what we were saying and had no idea that we were just covering introduction stuff. As they stood witnessing our interaction I heard them say “Oh wow, old friends being reunited, how sweet”. I guess that much physical interaction is not normal for perfect strangers. The sad thing is two days later I can’t even remember the girl's name. Just like the women in this picture. I met them once, and they are already hugging me. I love meeting new people and feeling like I have old friends. 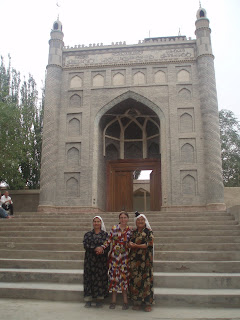