I Don't Know Why She Swallowed that Fly...

My friends and I decided to take in all the joys afforded us at the weekend market in Bangkok, including the bugs. 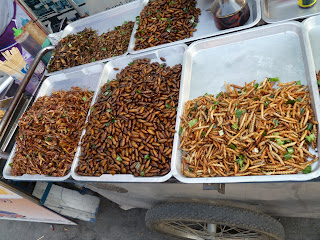 As you can see we came across a stall selling fried insects of every flavour and variety. We opted for one cockroach and a bag full of grasshoppers, to share as our afternoon snack. The initial dare to actually take a first bite was rather eventful, but by the end of the day we were just sitting in the park munching away on the remainder of them. For those of you who are interested there really isn't much flavour, they tasted like most greasy fried food with a bit of a crunch. I still don't know why I actually ate the groasshopper, other than the friend I was travelling with is one of those types of people who sees something new or different and says "let's try eating that". All I can say is it has been several days since I swallowed the bug, and I don't think I am going to die.

I'm impressed! both that you ate a grasshopper, and that you embedded a video in your blog page - I don't think I've seen that here before.

Just don't swallow a spider or a bird next...