That's Not Why They're Staring

It is common practice for Muslim women in our province to trade in their headscarves and long skirts for more revealing clothes when they come into the city. So when my friend, who was dressed like a western college student, told me that her mom was faithful in doing the five-times-a-day prayers and wearing very traditional Muslim clothes, I wasn’t at all surprised.

“But I’m sure when you go back to the countryside, you dress more conservatively, right?” I asked, eyeing her skin-tight jeans.

My friend nodded. “Yes, of course. But I still don’t wear the scarf; it makes my head itch.”

“You don’t wear a headscarf?” I couldn’t keep the shock out of my voice. “Everyone in the countryside wears a scarf! That’s just what you do. Even I wear a scarf when I go there, and I’m a foreigner.”

Now is was my friend’s turn to be surprised. “You wear a scarf? Why?”

“Because that’s just what you do. I mean, I wouldn’t run around the city without a bra on; it would be totally inappropriate. Everyone would stare at me. The same with not wearing a scarf in the countryside.”

She tilted her head to the side slightly. “They would be staring at you because you’re a foreigner, not because you’re missing an item of clothing,” she said, finally. 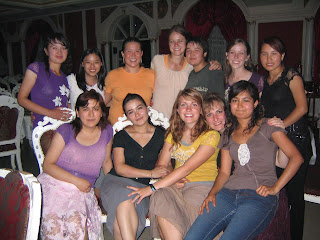 In the city you see jeans and t-shirts, arms, legs and faces. Trendy Modern Uyghur women 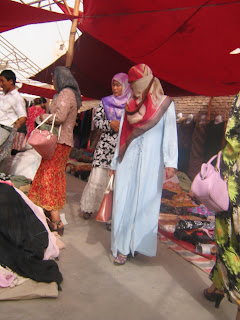 In the country side it's all about long skirts, long sleeves, head scarves, and no skin

Yes, but when you wear a headscarf, you don't look like a foreigner, right?

I wish wearing a headscarf was all it took to make me not look like an outsider... but as my friend said they will always stare at me for being different, for being foreign.