Home Town of My Heart

There is one small town in the southern part of this province that has always stood out to me above all the others.  Kerya is still like stepping into the past with the dusty dirt roads winding between neighbors homes.  When asked by Uyghur friends in the city “oh, where are you from?”  I often try to fool them and say that I am from Kerya.  I can’t really convince many of them, but a few do pause for a minute to consider if I am being serious.  I think it is because this region is known to have slightly fairer lighter skinned and haired people.  In fact some actually call them ‘Yellow Uyghurs’ because of their ‘blond’ hair – just like mine.

Ancient history teaches that Kerya use to be its own kingdom.  Once the princess of Kerya was kidnapped and was being forced to marry a king from a nearby land.  The women of Kerya are said to have raised up with furry at the treatment of their beloved princess and chased after the warring King to retrieve their precious monarchy.  The women won the battle and were reward by the royalty with these special robes that speak of their bravery and strength.  The blue bars are like their breastplate for battle.   ( The details of this story might not be 100% accurate.  It is one of those legends that everyone one I ask tells me a slightly differing version).

The women of this region are still known throughout the province for these unique outfits and accompanying small teacup shaped hats.  They tend to wear them for family celebrations like weddings and circumcisions.  Every time I have gone down to visit the home town of my heart I have sworn that I would buy one of the traditional robes… but every time I asked the price, I can’t get over spending about $50 USD on something that I will never really wear.  Friends of mine are packing to go back to the states for an undetermined length of time and as part of their farewell ‘bu yao’ they generously gave me their Kerya robe.

Now I really do fit in.  I bet you can’t pick out the imposter. 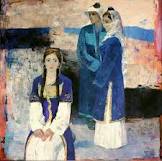 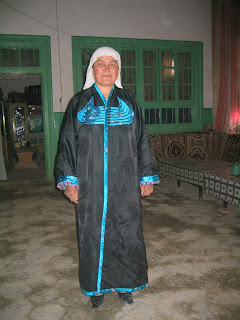 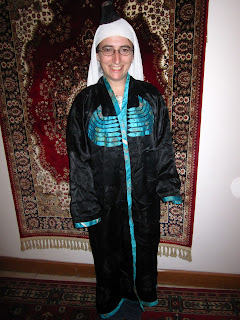