Fly Through the Air With the Greatest of Ease

Last night my classmates and I went to the theatre downtown to take in a performance entitled Yakximosiz Ependy – literally ‘Hello Sir’. It was an amazing two hours filled with singing, dancing, juggling, and acrobatic tricks.

In one act eight of so girls came out riding unicycles. Each one had a number of tea cups stacked on her head. They started by doing a line dance type number where they rode their bikes in unison in every different direction across the stage. Next they started taking the cups off their head, balancing them on their feet and kicking them to another girl across the stage. She would effortlessly catch the flying cup on her head on top of the stack of six she was already balancing… all of this while still riding way up high on their bikes.

In another act contortionists bent this way and that, balancing against each other. This act alone was pretty amazing considering they could move their bodies in ways I never even considered possible… but to top it off they did it all with lit candles on their heads.

And my personal favourite was the tight rope walkers who can not only skip and dance on a little wire high above the stage; they can balance other people upside down on their head while doing it. At one point in the act three of four guys were standing on the rope at intervals of several feet. A fifth guy climbed up on the shoulders of the first and then proceeded to jump from there to the next guys shoulders and so on down the line. It was Amazing. 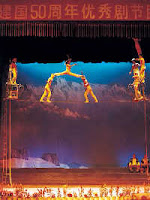 This art form is called "dawaz" in Uygur means aerial tightrope walking. According to historical records and uncovered relics, this form of art has at least a history of over 2000 years and it originated in part of Central Asia. Dawaz is an ancient sport widespread among the Uygurs. Since then Central Asia has been a breeding ground for such acrobatic arts as pole stunts, ball juggling, sword skills, magic, and animal taming. Traveling showmen who made their livings from acrobatic shows have taken these breathtaking skills far and wide. We talked to the father of one of the performers after the show who said his fourteen year old daughter has travelled to the Middle East, Canada, and Japan performing these stunts.

Our white western faces once again served us well as we were invited back stage after the show to meet the performers and take a few pictures with them. These guys told us they had been practicing and rehearsing for this show for almost three years, and trust me when I say it was worth it.

Wow! Now that is some impressive stuff! :)

Looks like it was a great show! Jay and I will definitely have to take that in sometime.