Wreaths of Roses – It's a Guy Thing

So our second theater experience taught us more and more about this modern Uyghur arts community that we are trying to break into. The tickets were crazy expensive, we got the cheap seats and still felt the strain on the budget at paying almost $25 US for one night of entertainment. The most expensive/ best seats in the house were selling for almost $175US, but our neighbors that we talked to about the show all seemed to think it was worth it when they heard the famous names that would be performing. 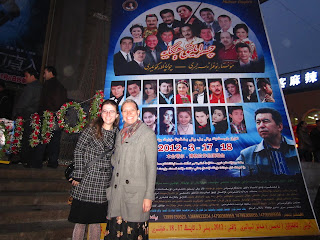 We got all dressed up with bling and leopard print for the performance and even met up with some of our friends for dinner first. As the lights dimmed and the actors took to the stage we quickly realized that a lot of the evening was going to be above our heads linguistically. The poetry and the music both were written with a superior grasp and articulation of the language. But music is one of those art forms that lyrics don’t have to be understood for the message to be communicated. 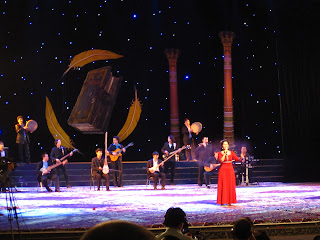 As one artist was caught up in the deep emotion of her song a small child ran up on the stage and handed her a bunch of flowers. It took the kid a minute to get the musicians attention, she actually ended up pulling on her sleeve a little. The performer graciously accepted the gift and the interruption as she tried to continue singing.

This young girl was not the only audience member to take to the stage during the evening… in fact men, women, and children alike had all purchased bouquets and wreaths of flowers to give their favorite singer or dancer. Grown men would march on stage and mid note drape a fellow male singer around the neck with a ornate arrangement of roses. They do it was such composure and masculine flare that I almost lost the humor of a guy giving another guy flowers. This wouldn’t happen in North America, would it? The audience is not allowed on stage to shower the entertainers with gifts of appreciation are they? I have witnessed this sort of group participation before, it is a regular part of school performances here. A student will have to sing a song in front of the whole class and part way through his/her seat mate might run up and encourage them by passing off an apple from their lunch. I just never expected the same spontaneous acts to happen at a formal performance at the theater. You could tell which artists were best loved based on the armful of flowers they had to carry off stage. I also soon learned to judge who their fan base was based on whether it was young giddy teen age girls adoringly showering the Uyghur Justen Beber with presents, or prestigious business men in the community offering their gratitude to their contemporaries. 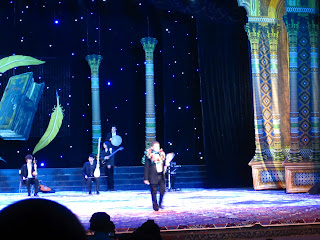