After living alone for almost four years my solitude has been broken, my space has been entered and I have taken in unlucky roommate number 13. I know that living by myself has made me more selfish about both my time and space, so hopefully she will be able to stand me. After 12 other roommates in the past I know it will take work, but I am kind of excited to have someone around the house again.

Amanda had been living in the same dorm building I use to live in here on campus. But after just six months she had had enough. It is one thing that they have been renovating non stop for almost three months, which fills the air with noise and dust, but then last week they came to her dorm and held out a key telling her she had to move right then to a new room. I guess they were ready to start demolishing her room. What they fail to understand is that to us, that is not just a dorm room, it is a home. Amanda had a fridge and oven; she couldn’t just pick up and be out of the space in half an hour. The boss of the building has been pulling more and more tricks of late between over charging me when I moved out, not letting our friends in to visit, and now making her move on a moments notice. So I convinced her to get out of there and join me in my nice new place. 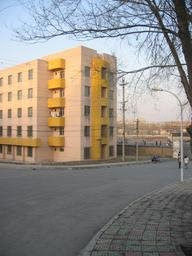 Goodbye to our old dorm building, trust me we will not miss it.

I have so many dorm stories since living there. My favourite was when I still lived at my old school. One day the building manager knocked on my door and asked me if I wanted to be locked in or locked out. When I asked for how long, they said “12 hours”. I guess they weren’t planning on paying someone to sit at the desk during the summer so they needed to lock the front door. At the time I only had a key to my room, not to the whole building , so when they were gone I had my choice of being locked in the building alone with no way out for 12 hours, or locked out and unable to return to my house for 12 hours. Once again they didn’t understand that it was my home. I paid the rent and wanted the freedom to come and go as I pleased. Sometimes dorm life out here has made me want to cry, or scream, or sometimes both at the same time.

Oh well, now both Amanda and I are out of that situation, and I have promised as her new landlord not pull any of the stunts that are so common out here. 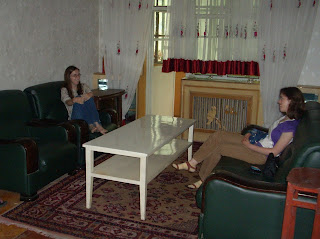 The two of us enjoying our new place together