My friend and I went shopping yesterday to buy her a dresser, we decided to save money and go to the used furniture market. This is a fun place to haggle with Uyghur sellers. When I go shopping in such places I normally change into a skirt to look more local, yesterday I went all out and put on my new bright pink and orange atlas dress. I stopped by the store on campus to ask them if they knew if a bus went from the school's back gate anywhere close to the market. They said no, and suggested we wait until they got off work. The lady was convinced I could never find the place on my own. I assured her I had been there before and knew it was near Turmarus restaurant and across from er dao wan road, neither of which she was familiar with ( I guess I know more about this town than they expect).

We arrived with no problems and started looking around. As we neared one man's section he smiled broadly at us as if in greeting and then said in Uyghur “you guys are ugly”. I think he was counting on the fact that we wouldn’t understand a word of what he was saying. But he chose to mess with the wrong girls “Why would you even say something like that?” I challenged back in Uyghur. All of his buddies laughed, instead of making us look stupid, he looked like the fool for greeting paying customers so rudely. After that sort of reception there was no way we were buying from him ( although sadly he had some of the nicer stuff).

Once we had bought our stuff we found a guy who was willing to transport it on a little motorized tricycle with a flat back. He not only had room for our purchases, but also for us. We sat sideways on his bike as he took off speeding though the streets of town. I had to use my toes to grip my sandals and keep them from falling off ( yes the weather warmed up just a little and I am back to my favourite footwear). We had to watch our feet when he took tight corners or other cars came in close beside us. There are no such things as seat belts for this sort of a ride. But thankfully we made it in one piece. 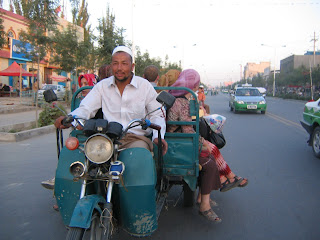 The bike looked a lot like this, but instead of just people it also had our stuff piled on it. This picture is taken in a small town with hardly any traffic on the street, but we were racing though the city streets. Let's just say these things don't come with seat belts, so you have to hang on tight.

The whole day was a great adventure.
Posted by KSA at 1:33 am