"What Women Want". I have to admit to never having seen it, but I am up enough of modern pop cultural references to know that the premise is about a guys who is able to hear what women are thinking. Last weekend when my roommate and I were visiting down south, we felt like we were given a similar power, a chance to hear what men are thinking. No fluke accident was involved in our obtaining of this power, just the gift of being foreigners, and able to understand the language.

As we walked down the street guys would look right at us and say things like "Foreigner" "Wow they look Uyghur" or my personal favourite that we heard more than once "beautiful". None of these men had any idea that we could understand a word of what they were saying, they thought the comments were just falling on deaf ears, so we decided to have a little fun and thanked them for telling us we looked Uyghur. It was a compliment considering that we had tried and were dressed very local. 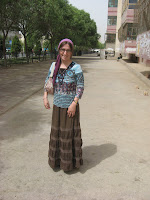 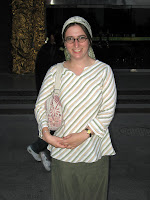 One husband and wife were having an argument in their carpet shop as to whether or not we really were Uyghur. The bus driver hated the fact that we were sitting near the back and he couldn't clearly hear our story, so he started to make up his own version of who we were and why we had come. According to him, and now what everyone who sat near the front of the bus firmly believes, I am Uyghur but my parents immigrated to Canada before I was born (which is why I look foreign and my skin is so white), but I have come back to work here and have great Uyghur because it is in my blood.
Posted by KSA at 9:49 pm

Love it!!!! You girls look great by the way ;) No wonder they were arguing about your 'status' hehehe

what a great compliment to be truly thought of as uyghur!

Love it! I guess if you're going to have the ability to read people's minds, it's much better if they are thinking nice thoughts about you.

This does not happen to Mel Gibson in _What Women Want_, which I've seen :)