No Two Snowflakes are Ever the Same

When we started to get into the Christmas mood out here my roommate and I decided to throw a party and invite some of our friends over to help us decorate. We got out the paper, markers, and scissors and decided we could have our friends help us make paper chains for the tree and cut out snowflakes for the window. 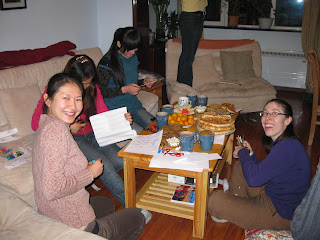 I had already make a few snowflakes before the guests arrived (ever since elementary school I have loved cutting out snowflakes and trying to make them as delicate as I can). Several of our friends saw the samples and decided they wanted to make them, but no one knew how. We had a group of over ten local college aged friends and none of them had ever cut out a snowflake before. I explained how to fold the paper, where to cut and where not to cut, I even made a new one as I explained. They all folded the paper, picked up one of my finished one and used it as a tracer. I tried to explain that no two snowflakes are the same and they they should use their own imagination to make their own. At that suggestion some of them gave up and went to make paper chains or to help hang the lights.

The whole situation made me think of what my American friends had commented about when they sent their kids to a local school. The education system here is based solely on rote memory and following examples to the letter. Creativity and imagination are not encouraged in school. They tell the story of when the teacher called them in because their son's picture of a cow was not the same. The teacher had been teaching an art lesson on how to draw a cow. Their son had changed his picture by making the cows head down and having him eat grass. The little boy had even added the grass to the picture. The teacher saw this as a child not able to follow directions and called his parents in for a meeting. The parents saw their son's picture as creative and fun, and praised him for thinking outside the imposed box.

Thinking back on this story reminded me why none of these young adults had never made a snowflake before. We cut them in school as an expression of our individuality, not a strict lesson in following rules. My friends still wanted a sample and so they cut out ones that were identical to mine. Now in our window there are more than 'two snowflakes that are the same'.
Posted by KSA at 9:30 pm

I have always loved the form and science of snowflakes. And Karen, yes you are an individual and I've certainly always figured you for a flake.

Have you heard that while in Ontario we've barely had any snow this winter that the US mid-atlantic states have really been hit. Washinton averages under 10 inches.... over 60 so far with 3 storms over 12!