ON YOUR MARK, GET SET, GO

Travelling locally takes my personal flexibility and need for spontaneity to a whole new level. A few weeks ago I took a small group travelling down south, as the only one who spoke Uyghur I was responsible for planning out route and buying our bus tickets.

I went to the bus station the day before we hoped to leave, but was told I couldn’t buy tickets this early. I had to get them within twenty four hours of the bus’ departure time. Sadly when I went back the next day our original destination was sold out, and we ended up heading to a completely different city, leaving three hours earlier than planned.

A few days later we were leaving one city to head further south. I sent the girls I was travelling with to the local English training school to teach an English corner while I went to buy our tickets. I wanted to be leaving in about two hours, I figured that gave them an hour to teach class and another to make it to the bus station and buy snacks for the road. But once again I was told I was too early to buy those tickets. They filled up one bus, as soon as it left the station they would start to sell tickets for the next one. 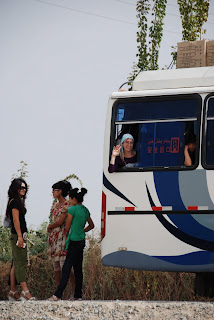 My favourite one from the trip was when we bought tickets first thing in the morning and according to the time printed on them we still had an hour and a half or so before we were suppose to leave. I was just about to suggest we go shopping at the bazaar around the corner from the bus station, when someone yelled out the name of the city we were heading to. Only to learn they had sold out all the seats and were ready to go… the time printed was nothing but a mere suggestion, an approximation of when they might leave.

Locals are much better at this ‘travel whenever’ mentality than I am. They are ready to go on a moment’s notice. Like the woman that had, by our definition, essentially been hitchhiking and waiting for a bus that had room to pick them up. It was 1:30 in the morning when they climbed on our bus from some desert village in the middle of nowhere to spend the night sleeping on the floor between the bunks. They didn’t seem fazed at all by the uncomfortable sleeping arrangements or the odd hour at which their travels began. 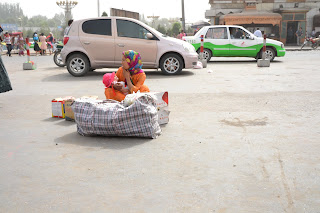 When the driver says ‘Go’ you better be ready.

I love that picture of you peeking out the back of the bus!