Uyhgur people pride themselves on their hospitality.  They will invite you in, even when they are on their way out the door.  It is the polite thing to do… but you don’t actually have to accept unless they offer more than three times.  Often a simple “Thank
you, see you later” will suffice to get you out of this sort of invitation.
While we were down south, my travel companions were taking pictures and I stopped to play with a small child.  Soon enough his grandparents appeared at the door of a nearby home- peeking out to see who was talking to the child.  When they saw us, they invited us in.  We politely declined.  They asked again… this time citing how tired we must be after walking around all morning.  Once again we refused to impose on them.  Finally a third time they entreated us to enter their home saying we should sit for a while.  The wife looked a little stressed, but the husband was so insistent, already holding the white lace curtain back from the doorway and motioning us to cross the threshold. 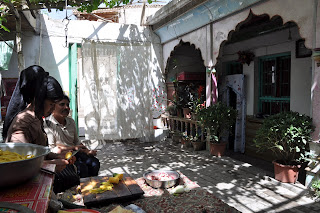 The courtyard of the home was brightly lite with the morning sun streaming in.  Several young women bustled about cutting pieces of meat, chopping potatoes and stirring the great smelling concoction that was boiling away on the stove.  The house a furry of excitement and we sat down right in the middle of it on the raised platform.  Some of the family stopped to nod in our direction or engage us in mindless chitchat, but for the most part they industriously kept working on food preparation.    We soon came to find out they were in the midst of preparing to host a party that night for over 30 guests.  No wonder the wife had looked stressed.  This was one of those time that the family really hadn’t wanted guests, but we had taken them at their word and were now adding to their hospitality work load of the day.  Even after eight years here I still can’t always read these situations correctly.

The husband seemed to know it was his ‘fault’ we had come in, and it was left to him to serve us.  This is a very anti cultural thing.  It is always the youngest woman in the family’s job to run around like a slave and serve the guests… but she was still busy cutting veggies, she had moved on from potatoes and was tackling the large pile of carrots that sat washed and scrubbed in front of her.  The husband was not use to the job and entertaining, he forgot to give us tea… but he did get us each a bowl of ‘langpong’ a clear glassy starch noodle served in a mixture of black vinegar and red pepper spice.  My friend has nicked named it ‘man jello’ for its consistence and the kick in it taste. 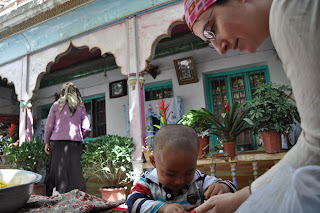 We eat rather quickly, played with the little boy for a few more minutes, complimented their home and prepared to take our leave.  We didn’t want to bring the family more trouble than we already had and tried to excuse ourselves from their home.  “No stay,” they all chimed in.  Even though the same command was repeated several more times, we took our leave, grateful for the snack and a place to rest out of the hot sun.
Posted by KSA at 5:20 am