A Time to Dance

Uyghurs have an intriguing dance called the Sama. It’s a dance for men only, and it’s danced only during special occasions, like a wedding or a holiday. 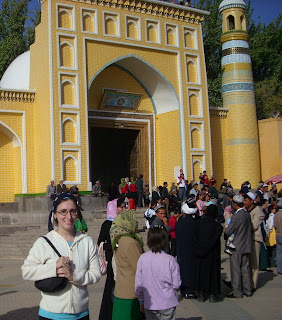 The Muslim month of fasting called Ramadan ended last week with a holiday called Roza Heyt. After the usual morning prayers were finished, everyone eats a big breakfast. If they’ve been fasting, this is the first breakfast after sunrise that they’ve had in a month. Following breakfast, a large crowd gathered in front of the countries largest mosque for music and dancing. The musicians sat on the roof of the mosque as their instruments played out a lively tune. At first everyone just gathered in a circle waiting anxiously for the dance to begin. The young boys called out “Sama, Sama” and occasionally one or two men would start to dance in the center. Before we knew it a kind of free-for-all Sama started taking shape, with men swirling around in a circle, some intent on dancing, others just passing the time of day, all surrounded by a huge crowd of Uyghurs, and interested on lookers. This year I was one of the many watching this fascinating scene.