Thankful to be Included

Yesterday was American Thanksgiving, and well it is true that as a Canadian I officially celebrate over a month ago, when the northern climate ushered in the harvest, it was a pleasure to be asked to join others in yesterdays celebrations. Since many of the expates in my community are from the , the holiday was actually pretty important out here.

One family that I am friends with was hosting a traditional thanksgiving dinner for ten of their closest Uyghur friends and their own family of four… when they heard my roommate and I didn’t have plans they graciously extended an invitation (because when you are already planning to cook for 15, what is two more). 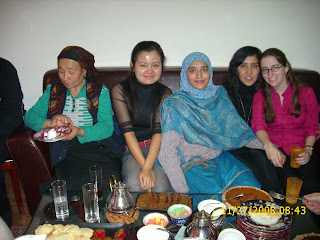 Before dinner we went around the room asking everyone to express one thing they are thankful for. As normally happens when we try this out here, the responses were much the same. “I am thankful that you invited us to join you for dinner”, “I am thankful for my foreign friends” or “I am thankful for everything God has given me”. They might sound like trite answers, but they are offered from the heart.

I myself reflected on how thankful I am for my new knees. Since I came back in July I have repeatedly been amazed how much easier it is to live out here when I am not in constant pain. I can now make it to my fifth floor classroom with out hassle. I can climb on and off the bus, with out holding up the whole line.

I was also thankful for the real turkey that we were eating. We normally can’t find a whole bird out here, and well out hosts did admit to me later that they likely spent double on it than they would have if in America… it was worth the price to watch friends join in the tradition for the very first time. 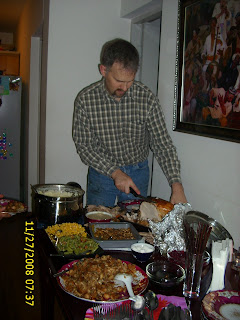 I love the picture of all you girls. Soooo cute!!!

what a treat to get to share a turkey. that spread on the table looks fabulous!