I got my sad little Charlie Brown Christmas tree put up this week, which really gives the whole apartment more of the feel of Christmas. 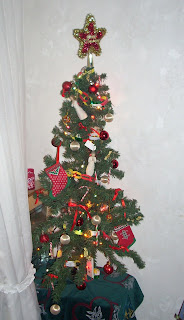 Also the huge amounts of snow that was dumped on the city this week went quite far to getting me in the spirit of things.

I was out walking on the first day it snowed (before the masses had gotten out to clean off the roads) and actually went for quite a tumble. I am alright… although I was pretty stiff there for a few days. The good news, if you can say that when you slip on the ice in the middle of the road, is that I sounded local while doing it. Out of all the sounds, noises, or colourful metaphors that could have come streaming out of my mouth in this moment of panic… I screamed “Woi Jan”. This Uyghur expression would most literally be translated “Oh dear”. The guy walking behind me a few feet thought it was hilarious to see a foreign girl scream out like an old Uyghur lady that he was still laughing to himself as he gave me a hand up.

your tree is cute.
and i think i would have laughed to hear you call out like an old lady, too. here people say, oy or yanna, and they always laugh at me when i use those phrases :)

I love your tree! Sooo cute :)