On one of my recent trips leading a tour group south we went to visit a Sufi mosque out in the middle of the desert. This sight is said to be the location of a great battle, where at the last minute a miracle took place overthrowing the enemy and giving great victory. I wish I could go into more detail about the actual event, but all the details are a little fuzzy (it is one of those stories that if you ask 12 people what happened, you get at least 20 different versions of the event). The reason this mosque has become a stop on the trips I lead is because it shows a much more folk Islamic side, with prayer flags waving in the wind, and people making the arduous journey through the desert in hopes of earning merit in their worship. 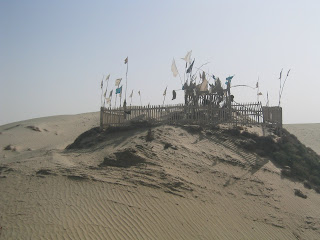 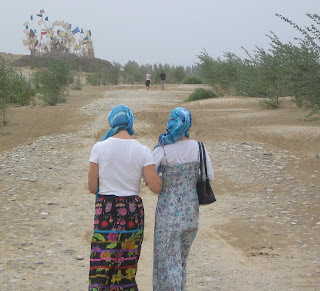 As I stood in the courtyard pointing out highlights for the group, I was reminded of my first trip back in 2005 to this supposed sacred spot. At the time I had just started studying the Uyghur language and was anxious to practice with anyone who would give me the time of day. This mosque not only severs as a place of worship for many on a spiritual quest, it is also home to those who want to dwell in its walls of safety. At the time they said upwards of 20 people actually called the mosque’s courtyard “home”. As my fellow travelers were lead into the kitchen area to hear the prepared speech, I broke away from the group to find someone to practice language with. 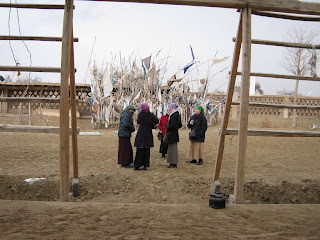 In a room off to the side I found six women sitting on the floor eating lunch. They kindly invited me to come in and join them. As I sat on the floor running through my list of first year language learning question (aka, “What’s your name? How many people are in your family? and so on), one women kept persisting that I eat some of their food. Rations looked scarce in this remount desert location so I shied away from eating someone else’s portion. This same old lady next to me, took a heaping spoonful and chewed away intentionally on it. After a several minutes she spit the softened food back on to her spoon and insisted again that I eat. I opened my mouth to protest once more, my gag reflex was at a high just looking at her pre- chewed food waving on the spoon in front of me. The spoon moved closer to my mouth and I gaped in surprise as I realized for the first time she was offering me her very own, straight from her mouth food. My open mouth stare gave her just the opportunity she needed to shove the spoon in. At which point, gag reflexes or not, I had no choice but to chew and swallow the food she had so generously deposited in my mouth.

I had seen Uyghur women do this before for their babies, softening the food by pre-chewing it and spiting it directly into their young child’s anxiously awaiting mouth. I have no idea what convinced this older women to treat me like a baby bird, but in her tender expression of care for me, she saw fit to share her own dinner. This event still tops the list as one of my grossest and most culturally abrasive moments I have encountered in my seven year here. 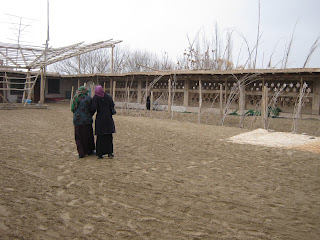 Oh. My. Word. Well, brownie points for swallowing it, K - don't think I could have done that. At least she didn't spit the food directly into your mouth!

The second picture is lovely! So sweet looking girls from behind at least. I once was told to chew nuts and spit into the baby's mouth at an Uyghur home when the mother was busy cooking-- and I did it. But your story! Oh my! I think I would have choked--- you handled it so well!!