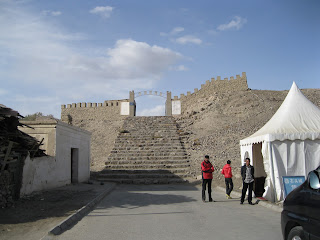 I decided not to accompany my group up the steep steps to the ancient stone fortress, instead I sat comfortably in the shade of the ticket sellers stand and chatted it up with them.

I was very glad for my decision when the engine sound of two large buses meet our ears.  These buses were filled with tourist from the eastern part of the country seeking adventure in the ‘wild west’.  This adventure for them included, matching hats, a tour guide with a flag and megaphone to instruct their every step.  As they waited for their tour guide to buy the tickets two of them spotted me.

“Look at that one” she said pointing directly at me (not so rude in their culture, but very rude to the Uyghur side of me).  “I have never seen a Tajik girl wearing glasses”.  She lifted her million dollar camera with the three meter long fancy lens on it and started to gesture at me for permission to take my photo.  I couldn’t help but sigh a little as I nodded my ascent and sat up a little straighter.

As she fettled with her camera, focusing the lens and attempting to capture my big nose in all its glory ( a physical trait I do happen to have in common with Tajik people) I could help but ask:
“You do know I am not Tajik right?”

Her friend recovered first from the shock of the fact I spoke their language.  “What minority are you?”
“I’m not, I’m a foreigner from Canada.” I answered, wishing I had kept my mouth shut.

Soon she was motioning for five of her other friends to come and jump in the picture with me, and the poor Tajik girl I had been sitting talking too, whose culture they had travelled al this way to learn about, sat ignored on a bench in the back.
Posted by KSA at 11:25 pm

oh dear, I love you friend! I'm wishing I could be with you there....