She is No Beauty School Drop Out


Our third roommate left last week to head back to her hometown.  She was a Uyghur girl who had come up to the big city to study Uyghur wedding hair and makeup with the hope of opening he own beauty shop.  She ended up finding a school close to our home that specialized in  hair and makeup.  Every day the students would stand outside the school and try to entice women to come in and let them practice on them.  Both my roommate and I grab a friend and went on separate occasions to have our makeup done.  Wow, just getting done up gave me a lot of insight on what a Uyghur bride goes through.

Traditionally at a wedding the bride is suppose to keep her eyes down and look a little sad at the thought of leaving her family.  I always marveled at the demure look of the girls here,  their shy upwards glances, and their straight faces .  At home the bride is normally smiling from ear to ear, greeting all of their guests in the eye.  Now I know it is not just culture that keep a Uyghur girl form acting this way… it is the ton of makeup that weighs he eye lids down.

When I went in I told them I was going to a theater performance that night, they all agreed that meant I didn’t need the full out wedding look.  Instead I only got one set of extra long fake eyelashes with several coatings of mascara on them.    I also had scotch tape on my eye lids to help achieve the double eye lid fold – which is crazy since I am westerner and I naturally look like that.  Maybe some of you don’t know the Asian obsession with having a double eye lid.  Many people have surgery done to create this effect of having a small crease above their eyes.  For those who don’t want to go to such drastic measures a small piece of tape can be placed on you upper lid which causes the skin to fold over on itself.  People with my culture background are born with this added skin above the eye.  But even though I have a double lid, my beauty consultant student felt it necessary to accentuate it by sticking two pieces of tape on. The tape had to be covered over with several layers of foundation, eye shadow and glitter.  By the time all the eye makeup had been applied I could bear look up if I wanted to.  My eyes felt so caked and heavy that I had trouble fully enjoying the theater show.  No wonder brides look down, their eyes hurt too much to do anything else. 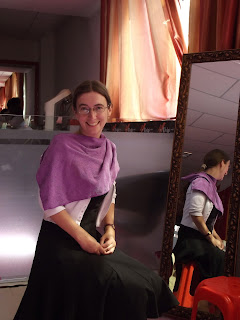 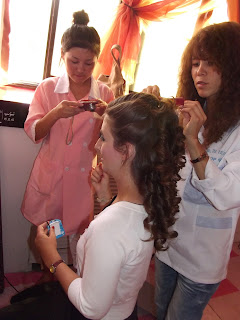 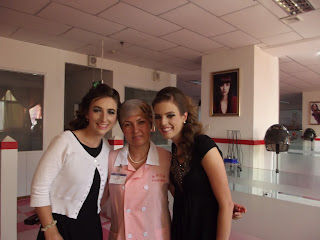 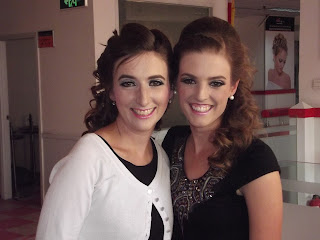 In one afternoon I was wearing more makeup that I have cumulatively in my whole life, and they had gone easy on me since I was just to a performance.   No wonder when my roommate look at pictures from my brother’s wedding she asked me if the brides in my country don’t wear makeup.  The idea of a simple, natural look that still even vaguely resembles your original state is unheard of.

After her classes finished our house began to take on the feel of bridal Barbie’s’ glittering paradise.  She was out daily shopping for wedding dresses (she bought eight or nine of them to rent out), bridesmaid's dresses, tiaras, necklaces, veils, fake flower bouquets, wedding car decoration,  and anything else that sparkled.  The office in our apartment became over run with supper huge hoop skirts- the type that doesn’t even fit through the door way and hair products.   Finally all of it got stuffed into several large bags and dragged to the bus station.  While I miss having my roommate around, I have to admit it is nice not to be finding glitter in sticking to every fiber of the carpets, or bobby pins and fake eye lashes lying abandoned on the coffee table. 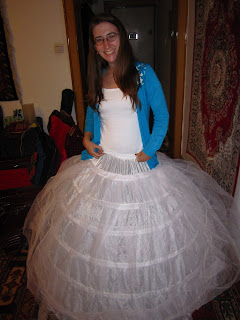 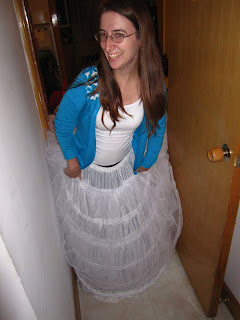 Wow! I would NOT have recognized you. I'm afraid to ask how long it took you to take all that off...I bet you had lined eyes for quite a few days afterwards!