All through college one of my favourite things to do was go order a large double double and a sour cream glazed doughnut from Tim Horton's. In fact I have even had dreams about this combination ever since moving to Central Asia. I heard that they had opened one for the troops in Kandahar, and even pulled out a map to see if I could figure out how far it was to my closest Timmy's (when I saw that I would have to cross some tall mountains, pass through Pakistan just to get to the base, I decided that maybe it wasn't worth it). But hitting Timmy's is the first thing I do when I arrive home in Canada. 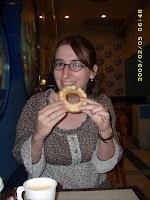 Thailand really is the land of plenty, it might not be flowing with milk and honey, but it does make my dreams come true. Yesterday while walking through the mall I noticed that Mister Donut had something on the sign that strangely resembled my long lost friend, mister sour cream glazed. I was a little sceptical to actually try it, having been disappointed many times in the past by baked goods in Asia that look like the real thing, but tasted nothing like it. My friend had noticed how I was salivating over the picture, and bought me the doughnut to try today. I am pleased to report that it lived up to my memory. I still have three more days here, so the question is... how many doughnuts can I eat in that amount of time???
Posted by KSA at 6:01 am

You could always take a few home with you and put in the freezer for future consumption, rather than being a little piggy over the next few days.
I like the top is it new.
Mom

this is exciting indeed. i love tim horton's and look forward to eating their yummy doughnuts and drinking their delish coffee whenever i go to canada to visit family.