Thanks to a new ruling by local officials, all foreign students need to move on campus. Officially this is said to be for our safety and protection (which is just funny).

The other day I helped friends of mine make the move. Moving here is actually one of the tasks that is surprisingly simple. I called the moving company the day before and told them about what time we wanted them to come. As long as you don't have a piano, a safe or an aquarium that need to be moved, the cost is only about $12 for the truck and another buck fifty for each floor. So for instance my friends were moving from a first floor apartment to a fourth floor one... five floors in total cost them about $7.50. Which means in theory one can move for less than $20 (Sadly my friends were deemed to have too much stuff to fit in one truck, so the guys had to make it two trips and it cost them double).

For that low price two or three guys will come with a truck and move everything you have with lightening speed. My job was to sit out with the truck and make sure everything made it in, and nothing was ripped off by passer-byers (it is a hard job sitting in the sunshine watching other people engage in heavy labour). It always amazes me that the guys they send seem to be the scrawniest, little movers you have ever met. Yet despite there size they can make a pack mule look lazy as they stack up their load for each trip and start climbing up to the fourth floor (remember no elevators). 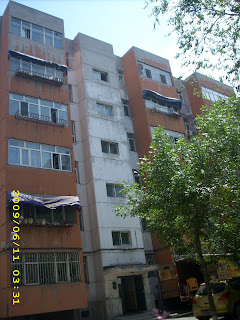 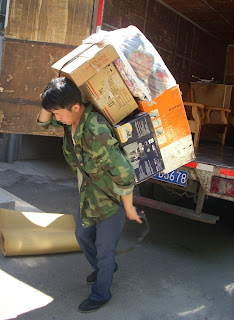 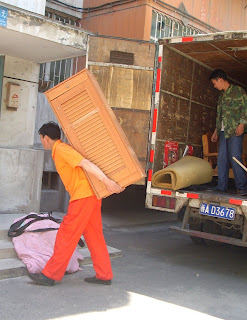 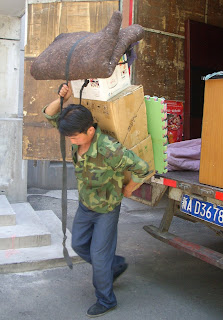 The movers hard at work
Posted by KSA at 9:46 pm

Do you have to move on campus too, since you're a foreign student?

Thankfully I already live on campus, so that means no moving for me. My landlord is a teacher at my school who is spending a few years studying in Canada. I actually meet him in Tim Horton's when I was home last year. He and his buddy were speaking Uyghur and I jumped in on their conversation. Living in his apartment this past year allowed me to finally get out of the dorm building (where I lived the first four years I was here), and into a nicer place on campus.