You Can't Get There From Here

The road by the front gate of my school is currently under construction. This means that my normally very convenient place to live has become a VERY inconvenient place.

When my family was here to visit four years ago, my brother averaged it out and said that a new bus arrived at the bus stop every 35 seconds. I have been spoiled with the ease of it all. Now the bus stop is an extra ten minute walk away. Added to the extended walk to get to the bus, is the extended length of time spent on the bus. There are so many buses being redirected that traffic jams are now prevalent on the smallest little lanes. Sometimes they are trying to go down roads that you don't even think could fit a bus, much less one going each direction.

Traffic laws here run under the assumption that the first person to get their nose into a small spot gets to have it. So three lanes of traffic will often compete to meld into the same narrow space. Here is a file photo of a relatively calm intersection, where you can see a traffic jam in the making. 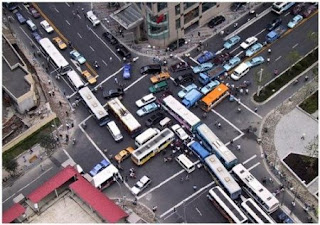 All of this has resulted in a lot more walking for me. I have realized that any location within a half hour walking radius is likely easier and quicker to get to on foot than it would be by bus. So I guess that means I will be walking for a while ( they estimate finishing the construction in Oct)
Posted by KSA at 8:34 pm

I feel your pain!!! They have been doing construction here too and my beloved bus stop was being 'updated' so I had to walk a little further. BUT, its now finished so I'm back to my lazy self again. hehhehe.

I love that picture! Now that is a jammmmm!

That I just as you said it is. my goodness that is just like back home for me. what are the insurence claims like...