A Night in the Airport

I am currently in the warm sunny south of Thailand. It was a long and adventurous trip to get here, but we made it to the land of good food and warm sunshine.

When we first checked in at our local airport it was interesting to see what items in our checked luggage caught the official’s attention.
We had to open our bags and show off the five jars of peanut butter that we were carrying for friends that had moved out here. They also searched my friend’s bag and questioned her on her “gang of four” which is nothing but a card game, another friend also had his pack of Uno cards called into question. Meanwhile our third bag was filled with a bread maker, blood pressure cuff, and other odd electronic devices that passed through without even the raise of an eyebrow.

We took three flights and had six hour layovers between each flight. We ran into old friends in the Bangkok airport and spent our layover not sleeping on the hard metal benches. Thankfully there was a McDonalds in the airport. A big mac tastes so much better when you haven't had one in months. 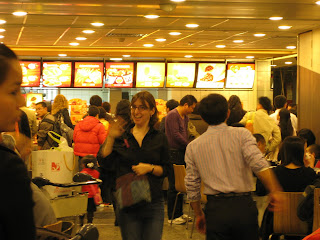 Ever since I had my surgery last year I have been displeased by the dark red scars that it left on my knees. But I have finally found a reason to be thankful for them. Going through metal detectors when I have enough metal inside me to be the bionic woman can really make a lot of noise and draw a lot of attention. At one of the security checks that I went through I actually had to pull up my jeans to prove that the sound was coming from inside and that I had nothing attached to me. The security guard looked a little perturbed by the whole thing and actually asked another official what she should do in this case. . Thankfully her co-worker could see the obvious signs of my surgery from across the way and waved me though the metal detector.
Posted by KSA at 11:10 pm

Happy to hear you found a reason to be thankful for your butt ugly scars.

I can only imagine how annoying that must be for you....like airport security isn't difficult enough. Good thing you are so positive about it! :) Have fun!