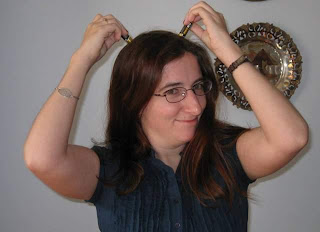 My friends and I wanted to take some pictures, only I realized that my camera was sadly out of batteries. Locally purchased batteries don't tend to last as long, but I had just changed them the week before, so I was disappointed that they had died so quickly.

"No problem" said one girl "just rub them in your hair".

"Yea the oil in your hair makes them work" said the other girl.

"No, it's the static electricity"

I thought they were both crazy, I didn't know how the oil or my dry fly away hair was going to recharge anything. But the amazing thing was that it worked. We were able to take several pictures.
Posted by KSA at 9:21 am