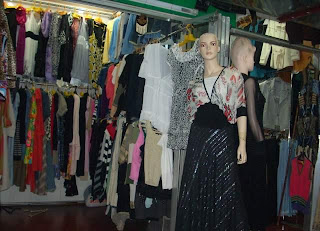 I have lived here for almost six years and I just found the local thrift store the other day. Actually I was really surprised that we even have a second hand clothing store in town, for several reasons.

Recently I had a post explaining how the entire outfit I was wearing was either, tired, sewed or glued in place. The quality tends to be so poor that most clothes don't last long enough to make it to hand-me-down status.

I have heard of Uyghur families threatening their children that if they don't behave they will force them to wear second hand clothing.

When my roommate and I were studying at the University last year we had the habit (like most young women) of borrowing each other's clothes and mixing and matching our outfits. One of our Uyghur teachers was totally insulted by this practice. She told us when you wear someone else's clothes, you actually take their sin upon yourself.

My friend's mother died suddenly last month and she said she was wearing her mom's old clothes but she didn't want to give them away to anyone else because Muslims believe that if you wear a dead persons clothing you must pray for them each time you put them on. She is afraid that other people will forget to say the prayers and her mother will not be able to rest.

Despite all these reasons against thrift stores I found one with some great stuff. The funniest thing is that used clothing stores have the same smell whether in Canada or here.
Posted by KSA at 6:46 pm